The Captain has Returned From Grand Haven Art Walk and ArtPrize, and Sets About Boosting Cultural Muskegon. So He Raps with Carla Hill of the West Michigan Symphony and The Block 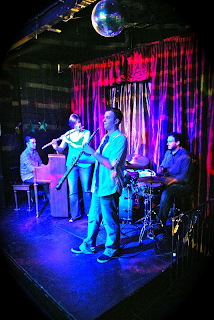 It's kind that Carla Hill talks to bloggers. To thank her for her kindness, let me invite you to tune in 88.5 FM Wednesday, October 9th, 2013, around 9:30 in the morning for Carla Hill's monthly gig on The WGVU Morning Show with Shelley Irwin. The Helix Collective will join Shelley Irwin and Carla Hill in the studio.

No one is sure what will happen but it will be EPIC, with capital letters. Every cultural event in Muskegon County this October has a part in the annual Arts & Humanities Festival, so Andy Wible from Muskegon Community College will be representing Ah!Fest by telephone, too. Ah!Fest is Muskegon's Arts and Humanities Festival. Ah!Fest now shares the schedule and essay by Foley Schuler world wide, thanks to this WordPress site at Muskegon Community College.

Shelley Irwin posts these interviews for listening enjoyment later, which is how I'm tuning in. Readers, look for the interview on the GVSU website. For example, here's an interview with Adjunct Professor Tamara Fox, one of the most talented and subversive artists working in Grand Rapids:

Constantly mixing things up, Carla Hill and WMS has flown the Helix Collective from Los Angeles to the Block, West Michigan Symphony's intimate performance space, to perform Saturday night, October 12, 2013, 7:30 PM. This is an invitation for the audience to dance and have a good time.

Dance at a concert? This isn't an odd idea at Wheatland, Blissfest and Coast West. We all felt free to dance. "We can dance if we want to, We've got all your life and mine" or so goes the tune from Safety Dance by Men Without Hats. On the other hand, the Block exists in the newly reopened Russell Block, which hasn't seen dancing, not to mention people, in decades. The Russell Block just hung its first art show, a collection of paintings by Dan Parker, who hung them anonymously. So how does the Helix Collective plan on turning a concert hall into a discotheque? (As it turns out, this is a specialty of the Helix Collective).

So, I reached out to the maybe too accessible Carla Hill on Facebook and asked the following, "Could one of your staffers or you write in an imaginative way about dancing in The Block? I am an imaginative person and yet my vision fails. By the way, if your Captain has earned any recommendation credibility, that Captain would spend it on Dance in the Annex with Amy Wilson. Trip the Light & Salamagundi are two shows that endure for a mere evening, with exquisite music and sublime choreography, and that seems a great loss of a ready-to-go show. If only it is possible for lunch to happen between Ms. Wilson and Carla Hill. It's time that DITA shows travel beyond the Wealthy Theatre, led by Erin Wilson and his capable team. Wealthy Theater and the Block are two kin that deserve a reunion.

Amy Wilson, I intuit, would know how patrons could become participants and dance in The Block's space, still all potential and no tradition. My imagination suggests DITA and you have the vision to make that work. DITA brought dance to the green of Blandford Nature Center during SiTE:LAB, so the Russell Block could work too". The dance collective has raised their glamour after a series of wonderful performances at SiTE:LAB, ArtPrize 2013.

Carla Hill wrote back, "Tune in tomorrow morning and we'll ask Helix about the dancing. Thanks for the introduction to Amy."

Then the Captain went all garrulous on the kind leader of the WMS. Maybe he should stop writing his blog at the counter of the Shultz Haus in Muskegon Heights?

"The West Michigan Symphony has a great radio presence, and I delighted in hearing Scott Speck talking as the Stars of the Joffrey Ballet program progressed, so wisely and yet so affably, like a kid brother who just happens to be a great interpreter of music. I was sitting on my deck, watching the rain fall over Mona Lake, in a contemplative mood after Foley Schuler interviewed the poet Thomas Lynch on Blue Lake Public Radio."

As for Helix Collective on the Shelly Irwin's Morning Show on WGVU, my goal is to listen after, all is recorded and available soon, and write from that conversation. The Blockheads might be forwarded by a few good bloggers. I think about the Blockheads, and a few of your musicians were sounding a street tone that delighted. The idea of painting sheet music on the street or piano keys arose. Well, that can be done under the cover of night in a way that no gets arrested! Think of  it as West Michigan Symphony meets Fight Club by Chuck Palahniuk.

Here's an idea that might spread well through out the Blockheads. How does one spark up a conversation about attending the symphony or a Block performance? Begin with an ice breaker, such as a good musical joke. I passed a few hours looking for them, and some of them are too sharp. Too sharp. I crack myself up. But suppose a bank of one hundred or more classy music jokes can be found? Then, we teach people how to tell them.

This might involve asking board members to demonstrate on a YouTube video. It's clear that C.H. is a friend to humor. The idea of packing the house by charging by the carload was sublime ... wrestling for audience with the Lumberjacks, working hard like Lumberjacks. As for introducing Amy Wilson, that's like introducing Peggy Guggenheim to Anna Wintour, a honor".

Carla Hill hung in there like a pro. This is what we call passion. "Nice! Thanks for remembering my "charge by the carload" comment. Love the idea of Peggy meets Anna".

The Captain continued his barrage. "On that note, I have to express an amazing astounding moment. While learning the details on Thursday's visit of Jay Constantine to Muskegon Community College, I discovered I had missed a local performance of Marx in SOHO. As much as Captain Art Walk hawks the event calendars at VisitMuskegon.Org and the Charles Hackley Public Library, how is that possible? One, we have silos: MCC, CVB and HPL keep calendars and that's three points of input and three points of search.

The impeccable Cindy Beth Davis-Dykema, formally of the Howmet Playhouse Theater and now of the Sable Points Lighthouse Keepers Association, took on this dragon with her LAMA project. Lakes Area something is all I can remember. Sadly, she had no IT resources and it relied on frenetically busy cultural staffers to keep it up and running. I sense that Revel Marketing and Jason Piasecki and Len Piasecki might be helpful here, and maybe even Lisha Arino of Mlive and her team. The key is to reverse the idea that events are a chore. What if events and event information became a special kind of content, activated by a breakthrough in Social Media databases?"

Of course, I tried to arrange a good lunch for Carla Hill with the most passionate artist in Grand Rapids. When Roli Mancera engages another artist, he's loyal in a way that can only be described as old school, and we are talking the Aztecs and Mayas when we are talking about old school. His friendship with painter Abigail Bradley is so strong, he is present to protect her when she holds open houses in her studio near the corner of Market and Wealthy. So I threw it up into the air of Facebook, which allows a writer to throw a conversation with a simple link, "Roli Mancera, I am not sure Carla Hill will have time. Even so,although it is tragically late, could you write her a Facebook mail inviting her for Tacos with Roli and El Cuñado on Gay Street, Grand Rapids. Since Jason Quigno, the Native American Sculptor joined you today, she'll be in good company."

Wow, after putting the symphony leader through all that, I should be buying a season subscription and making a tax deductible donation. You can too, through the following website.
http://westmichigansymphony.org/.
Posted by Wilbo at 10:39 PM