Keemo Paints Simple Images that Set Your Eyes On Journeys 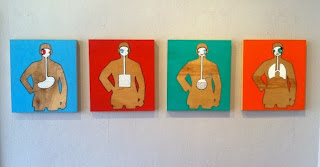 Everyone knows that I'm big on Keemo, a painter in Grand Rapids represented by Richard App Gallery. The four images caught my eye because the four show the same body image and focus on the esophagus. Keemo works in similarity as a method to develop harmony. Keemo also works in discord as a method to develop engagement. I see a stomach on the far left. I see a pair of lungs on the far right. The stomach partakes of the material world. The lungs partake of the element of air, which is a token for the spiritual. Actors, Buddhists and practitioners of Yoga are first given lessons in breathing.

In the middle two, I see two organs of a quizzical nature, a square and a circle, two opposite geometrical types. We have human organs, which are from nature, contrasted with ideals, discovered by philosophers.

I am glad these four paintings have been installed by Richard App and Keemo in an office, and surely the order of colors was maintained. Blue on the far left is answered by orange on the far right. Red on the middle left is answered by green on the middle right. On the left, blue pairs with red and resonates. On the right, green pairs with orange and resonates.

Taken as a series of four, my mind begins to evoke the four amino acids of DNA: guanine, adenine, thymine, and cytosine. No question in my mind that these paintings belong in a home office dedicated to the work of a medical professional. I am sure the office holder will bounce ideas around the noggin as his or her eyes bounce from image to image.

For more of my writing about Keemo, see the Art Talk section of StellaFly:
Be Keen on Keemo
#CaptainAndKeemo
#CAW_DailyPicture
Posted by Wilbo at 6:52 PM