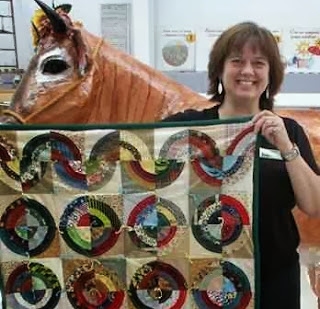 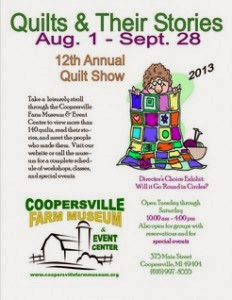 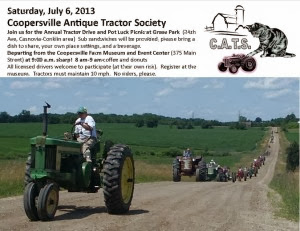 Lee Ann Creager Stitches Quilts with Threads of Fiber, Tractors and Electrons.
This article first appeared online at Beyond the Breakers

Let us now praise quilting neighbors. Let us begin with Lee Ann Creager, executive director of the Coopersville Farm Museum. Creager is holding up a bullet quilt she put together with the help of one of her quilting circles. Creager is all about circles, and the Captain has found himself in at least three of Creager's circles. I'm always giving a good word for the events her team and her produce at the Coopersville Farm Museum. That's because we discovered one another through social media back in 2009, and I was immediately charmed. She took a workshop on Twitter through the #Coopersville Chamber of Commerce and Laura Bergells of Grand Valley State University and she took off from there.

In social media, surely Creager recognized a way to stitch together patches of community with threads of electrons and data. I weave with Creager through at least two blogs, and I drop in to the museum for the agricultural art and the Jam Night. Look for the Jam Night first and third Tuesday of every month, on a custom-built stage built to look like a barn. Lee Ann Creager, let me turn in this article, my quilt panel today.

Turn up one night at the Coopersville Farm Museum, and you'll see it's as cozy as an heirloom duvet and as varied as a crazy quilt. The museum tends to stay open for holidays to be a center for celebration, a safe place for New Year's Eve and a neighborly place to enjoy the Fourth of July. On the Sixth of July, a tractor parade went forth from the museum, rolling toward a picnic on Crockery Lake in Casnovia, Michigan, almost thirteen miles away.  I'm trying to imagine all of those tractors passing through the Dutch, Mexican and Irish town of Conklin, which has a Dutch-American Mill, a Mexican-American grocery store and an Irish-American pub. It's quite an imaginary sight to see Creager weaving together the fields of clover, wheat, corn and apple trees with a thread of John Deere green. Tuesday, July 9th, 2013, around one hundred and forty quilts started arriving in the hands of their makers, right at 10:00 AM. I'm sure a community table had some coffee waiting and maybe some homemade cherry pie, now in season. There's often a table laden with good eats for the Jam Night.

I like the new attitude of the Grand Rapids Art Museum since Dana Friis-Hansen arrived from the south to put the institution on a more open path. Yet, I must express confusion. Coopersville Farm Museum has the Quilts & Their Stories show open from August 1st to September 28th. GRAM has the Improvisational Quilts of Susana Allen Hunter until August 25, 2013. The Coopersville Farm Museum celebrates a primary use of American landscape. The GRAM opens Masterpieces of American Landscape Painting 1820–1950 on October 20th, 2013. I'm just guessing with great hope of being right that Lee Ann Creager drove to downtown Grand Rapids to see the improvisations of Hunter. I-96 is a thread of asphalt that conveys east and west. The two museums are less than twenty miles apart, close enough to be stitched together.