Thanks to The Block, Musical Superstars Alessio Bax and Gabrielle Martinez Live Among the Muskegon Music Community for Almost a Week. 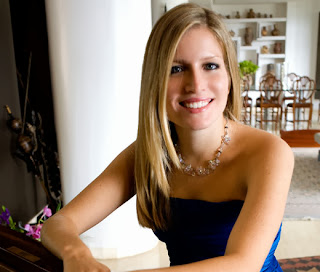 Alessio Bax and Gabriela Martinez are musical superstars who both performed a triple play in Muskegon, two evenings with the West Michigan Symphony and then a Sunday afternoon performance at The Block. Bax visited in the spring. This newly arrived fall, Ms. Martinez's afternoon show proves that this format will grow more and more popular. After seeing her perform on stage before an audience of more than a thousand people each night, the community had a chance to spend time with her in the intimacy of a concert space, no more than one hundred and fifty seats. Many of the patrons attended one of the symphony occasions, and arrived eager to make a connection with Ms. Martinez.

Martinez, like Bax, embraced her time as a citizen of Muskegon, making regular appearances at the counter of Drip Drop Drink and exploring our culinary scene at the Hearthstone Bistro, Mia and Grace and Smash. Alessio Bax also paid a visit to the student chefs at the Culinary Institute of Michigan, enjoying the fare from Courses Restaurant. As Muskegon's culinary scene expands, hopefully the visits from world musical talent will increase just as quickly.

Sunday afternoon found Martinez in vulnerable circumstances although totally under the protection of the symphony and her husband Grant, who had flown in on Friday. The Block was carved carefully but expediently out of the raw space of a building from the late Nineteenth Century, and a November's chill arrived. The well-designed space still has not yet a year's life as a concert hall and professional office. Staff has been most attentive to the shakedown phase; yet, Martinez performed her first number wearing a coat, cardigan and a comforter around her neck, without the music suffering one bit. Every layer colored New York City black. Eyes were glued to the thermostat as the audience's body heat warmed the two stories of the twenty feet high chamber. Number two on the program, she gave her coat to Carla Hill. After intermission, she felt comfortable enough to set her cardy and scarf upon a chair. The audience found Martinez even more endearing as she performed an extraordinary program, as if her fingers were as balmy as a Venezuelan summer.

Martinez charmed her audience with her charm and knowledge of her music. She explained that the Beethoven Sonata Op. 110 is a composition best performed in a living room, and we felt we were in a drawing room. She drew us close as we learned of her life as a piano prodigy, the fifth generation to play the piano in her family. She learned to play concertos while watching her mother teach a pupil in their home. We followed her story to New York City and New Jersey, where her family placed her for musical instruction in 1996, a move that gave her a natural American English accent. She opened herself to many question, telling how she learns a musical composition by practicing each passage with her right hand and then her left, learning each phrase so intimately, she could play her repertoire backwards. A piano teacher in the audience noticed how she compensated for a hand span of merely an octave, and we learned how Martinez's expressive piano technique begins in her lower back and proceeds through her body to her fingers.

Imagine intermission arrived and the audience was too enchanted to leave, even with a full open bar, hand-brewed coffee and cheesecake awaiting? Little did we know, Martinez still had to manage her travel arrangements home, and the airline wasn't fully accommodating. She managed to negotiate a direct flight home for Sunday night, from the quiet of the green room, during the intermission where the atmosphere equaled that of a good salon. One patron engaged an emergency room physician in the new social media means for breaking out news on fighting cancer, only one example of the quality of conversation available in the new concert hall. The staff appointed a young audience member to bong the gong so that no one delayed in taking their seats for the second half.

After the final note of the Szymanowski Variations, question and answer began again with such vigor, staff had to remind Martinez at four-forty five that she had a six-thirty flight to catch in Grand Rapids.  We bid her farewell after gaining her promise to come back again soon.

West Michigan Symphony and The Block
Posted by Wilbo at 8:14 PM