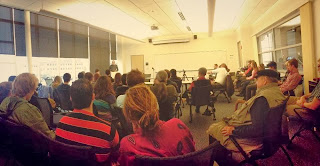 This is Shapiro's first visit to Grand Rapids after ten years in Detroit.
Creative destruction Marxists are almost indistinguishable from Capitalists.
Science Fiction is an access to futurity, tracking tendencies in the present. Counteracting powers might suppress these tendencies.
Tendencies are real but might not become actualities. Science Fiction is an excellent example of Accelerationism.
Neoliberalism is three elements: economic concentration, competition in all things, privatization of all public goods.
Cognitive mapping allows us to grapple with hyperobjects. We we deal with hyperobjects by pushing straight through. We cannot return to pre industrial simplicity.

Start from the bad old days not the good old days. Make capitalism break by pushing it to its extreme. Rather a reduction to an absurdity technique.
Wal-Mart can be co-opted. Use its technology to free people from toil. Capitalism must create the conditions of scarcity while it creates plenty. Take control of the technologies and use them to create plenty.

Now Dr. Shapiro is reading a passage from Marx regarding the colossal wealth created by one hundred years of the bourgeois.
Understand capitalism dialectically, not thumbs up and thumbs down. Some people have gained freedom from toil through capitalism. It is just that it creates poverty as well as wealth and dislocates people.
Marx argues that Capitalism is bridled by its property relations. The resources can't reach the new wave.
Digital rights management is an example. Data is almost free to copy but it must be owned and sold. It's transfer is thus restrained, slowed.

Will revolution help? It has many downsides. It's a nifty idea that depends on hyperactive volunteers.
The environment is a continuing crisis. Capitalism might not be able to solve it.
Read the collection of stories Babylon Babies. Aliens destroy the earth and humans survive as parasites on the aliens. Life is tenacious and inventive. That's quite an economic shift!
Now Dr. Shapiro is quoting Keynes on the possibilty of Capitalism to create leisure for all. It's not happening as of yet. The crash of 2008 has be responded to with more neocapitalist policies, pushing the big crisis into the future.

Accelerationism is a term from 2010 based upon thinkers from the sixties and seventies. 1968 a big uprising in France split the intelligentsia into left and right. The thinkers thought maybe it was necessary to push deeper into market practice instead of withdrawing from world markets. The Khmer Rouge withdrew from world markets and the killing fields arose.

Capitalism must destroy territory as well as create it. People and goods must move by world trade. But all things moved must be owned, made territory again.
All territory destroyed, a kind of nihilism and chaos results. Some thinkers say we should welcome this? This nihilsm destroys capitalism

How does Accelerationism look in aesthetics? Derivatives try to colonize the future and make the future controllable. Take unknowable outcomes and make it into mere risk. Creativity and novelty are businesses, sources of revolution. But in a way, an iPhone 4 is the same as an iPhone 5.

There is a deadlock in aesthetics that accelerationism can address. It does so often in science fiction, which explores utopias and dystopias.
Applause. Now questions.
Hypervolunteerism ... insanely driven volunteers, won't solve capitalistic issues. Stand down, comrades. Read and write science fiction instead?
To assist in understanding, I undertook to live blog the Steven Shaviro lecture.

Read the Substance of Style. All aesthetics and preferences can now be addressed. No one exhibits toilet brushes so it's not keeping up with the Jones.

There is an Accelerationism Manifesto on the Internet posted by Left thinkers who have made it a strategy.
Shaviro, not Shapiro!
Accelerate Manifesto