Craft House Tantalizes the Imagination As It Promises a Show Inspired by Richard Blanco's "One Today" for #FreeRadical, 11.1.2013 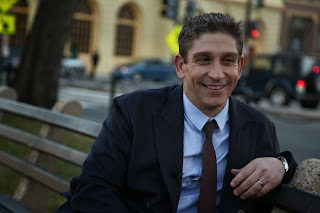 Had to look up the word transliterate. Wikipedia had a working definition: Transliteration is the conversion of a text from one script to another. This is not the act of translation. This is as simple as my writing Craft House in letters from the Greek Alphabet. When one considers we have four visual artists, and not necessarily graphic artists, transliteration promises to be a fascinating process at the small arts powerhouse across the street from Pub 43. Paintings and photographs will have to be transformed into script, at least an alphabet.
Seriously, watching the space in the last year, has anyone detected a single missed note in all the shows? Earned a Start Garden business investment. Won top kudos during ArtPrize 2013. Gave the curatorial reins to Tamara Fox for a show on clutter on aesthetic steroids. The artists have chosen to transliterate the inauguration poem read by Richard Blanco. That's daring because Robert Frost could not have written the technically perfect verse of One Today. That is to say, Frost came before the craft curricula, advanced degrees of American universities. Craft, and that's not a criticism, gleams in this poem, and yet Blanco almost embarrasses in his self-referential phrases, daring sentimentality. How will the four artists accomplish a transliteration of such a complex, advanced example of the languaging instinct? Show up for this one.