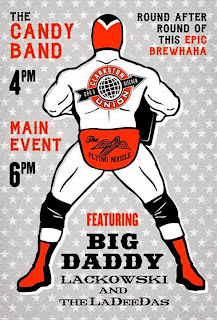 Hi Emma,
When I lived in Royal Oak, routinely I passed Oktoberfest at the
Dakota Inn on the south end of John R. in Detroit, where Oktoberfest
lasts for an entire month. Just buy a plate of bockwurst or schnitzel
and take a seat at the long wooden tables, and order up steins of
German beer. Better if one goes with an organized group because the
house gives groups better seating close to the pipe organ and the
dance floor.

Nice to have a replacement close to home. It's too far to go to
Frankenmuth, which I did at the drop of an Alpine hat, a drive less
than two hours north of suburban Detroit. I missed last year's
festival at the Winter Sports Complex, and I can see that was an
error, like drinking too much Riesling before playing Hammerschlagen.

And I missed Party in Your Parka!

I seemed to be the answer guy this year with men stopping by and
asking, "What's Hammerschlagen?" One guy Googled it and brought me up
to speed. And then it hit me. Not the hammer, but I remembered seeing
the hammer stump in the back of Old German Beer Hall, 1009 North Old
World 3rd Street in Milwaukee. A man in lederhosen plays Alpenhorn out
front, especially the Ricola cough drop theme.

I'm fascinated by the Oktoberfest's potential, especially since the
Michigan Irish Music Festival does so well in September. It might be
fun to have YouTube videos on how to prepare for Oktoberfest, teaching
for example all the table games Germans have thought up for passing
the beer drinking nights away, such as Fingerhackeln, defined below.
In late summer to early autumn, Muskegon goes from green to orange.

This might be of vital concern to German-Americans in Michigan. This
year was the last Oktoberfest at the Clarkston Union, although how do
the organizers know about 2014 from the viewpoint of 2013? I have the
same mystification about the declared final Roosevelt Park Days this
year, 2013. I guess Clarkston Union will just forget to rent a tent
and hire a polka band. Suffice to say, we're down an Oktoberfest in
Michigan at that lack must be balanced out.

One Oktoberfest, one fraulein in our group became a frau when
she married a staffer from Germany posted to an American branch in
Detroit. He made up German names for all of us, and I became Horst.
The couple now live north of Stratford-On-Avon and she sells books in
Britain. Some people have the life. This very game is celebrated in
Inglorious Basterds, the movie by Quentin Tarantino.

So let me know how I might be of service in planning and
conceptualization and publicizing.

Hawedere! (n.) (HOH-beh-die-air-ray)
Good day. Short for "Ich habe die Ehre" — I have the honor (of meeting
you), it is rather informal and used among friends.

Fingerhackeln (n.) (FING-ah-hag-in)
Two men hook their middle fingers and try to pull the opponent over
the table. A popular activity at the Oktoberfest.
Posted by Wilbo at 5:00 PM