The Friday Night Concert at Watermark 920 with Rachel Davis & Joshua Davis has now become a cycling exposition, even with bicycle sculpture. 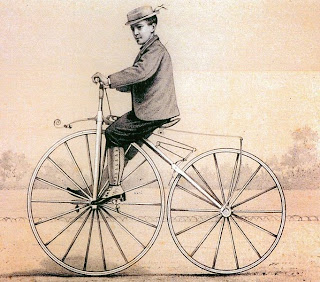 By the way, the Rachel Davis – Joshua Davis concert at Watermark 920
has a bicycle theme, and City Hub is involved, showing off bikes. A
few artists are bringing custom rides, bicycle as sculpture. Indeed,
cyclist Mat Moore has made chandeliers out of bicycle hubs.

Joshua Davis is almost famous. He spoke at our last TEDxMuskegon on
his run across Palestine for a charity out of Traverse City, and he
now works for that charity. Worth seeing.

Right now, tickets are five dollars if one brings a box of cheerios
for Kid's Food Basket. I could ask if people who ride their bike to
the concert could be accorded the same discount? With or without a box
of Cheerios. At least, it makes a good place to recruit riders. It
makes a rallying point. I'll be there.

Ride On, Muskegon,
Captain and Wilbo
Posted by Wilbo at 12:27 PM