With the assistance of John Sauve, the Scarab Club Honored the Art Work of Gary Grimshaw in Grimshaw's Swan Song Year. 6-26-14 #ArtWalkerFiles. 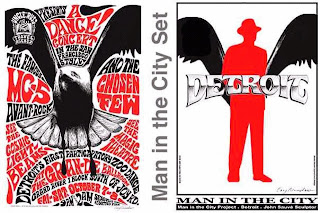 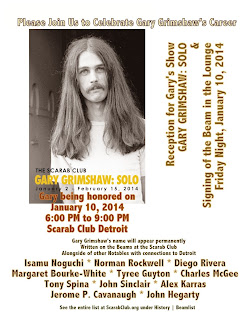 Nice to see John Sauve step up to save the Scarab Club. That is, the Historic Scarab Club of Detroit always needs saving. That's half the fun of hanging around the Scarab Club. Ever wonder why Captain Art Walk "Lives to Serve" and promotes the work of artists in Michigan? The ancient evenings in the chambers on Farnsworth are no mystery to your Captain. Once an exclusive club, the Scarab Club is now a 501 C3 arts charity. So come to an opening, settle into an arm chair, gaze up at the ceiling of beams and allow the hieroglyphic paintings to explain it all to you. What part of Ars Longa Vita Brevis are you failing to understand?

Speaking about those beams, Poet Vachel Lindsey signed first. Now, the honour is extended once yearly to an artist in conjunction with a lifetime retrospective. Gary Grimshaw, I have yet to confirm, might be this year's signer at a special evening June 26th, 2013. Stay tuned.

Grimshaw passed from this life January 13th, 2014. The occasion of his beam signing had been scheduled for January 10, 2014. His life is being honored by an exhibition at the Scarab Club that runs until middle February 2014.
Posted by Wilbo at 10:16 PM