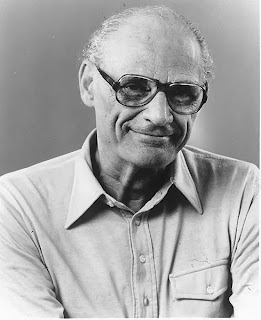 Natalie Carmolli is an ArtWalker who exhibited at our community center for ArtWalk 2010 in September. She displayed a painted lily that looked executed with a single gesture of white paint. Speaking about paint, let's talk face-paint. Central Park Players has a make-up artist on staff who aged the vibrant Carmolli three decades for her role as the wife of Joe Keller, a possible war profiteer from World War II. I follow theater on the West Michigan Shore from Chicago all the way up to the Historic Ramsdell Theater in Manistee, Michigan and the Bayview Summer Retreat in Petoskey, Michigan. So I have noted Carmolli as a distraught mother in Rabbit Hole at Muskegon Civic Theater and a proper British wife in Blithe Spirit. Oh yes, let us not forget her promising turn as director of MCT's The Dining Room by A.R. Gurney, which I praise to the skies as I type away at my dining room table.

The show starts Friday night, February 25 at 8:00 PM or go Saturday night, February 26 at 8:00 PM. It's an inexpensive ticket for quality theater, and the theater has plentiful, plush, almost royal seating. The company provides a nice snack at intermission, donation not required but appreciated. Have a snack and a cup of coffee because the drama will not let you loose after intermission and you'll need your strength as Carmolli, Dr. Remington Sprague and Chad Hoop take you into the dark heart of World War II, especially the air campaigns in the Pacific Theater and the shop floors of wartime factories. Although his part is brief, when George Deever arrives in the second act, alliances between characters are stretched beyond the breaking point. Played by Brian Reeds, it is the third time I've witnessed him soothe me and then shock me in the role of a morally ambiguous character.

As a rule of thumb, when a character in an Arthur Miller play takes off on a drive or walks into a home alone, brace yourself. All My Sons has one mad drive and numerous retreats into a house on stage.

I attended with a local art director who has been nominated for an award from the Detroit Independent Film Festival, and this is an excerpt from our text conversation after going home after a night on the town and a pint at Theater Bar:

Her: "If you commit that level of atrocity, does it give you an equal level of blissful, almost serendipitous attitude? Or does Arthur Miller mean it as a front".

Me: "Remember, the military forced them to ship and had no quality control. These characters were rats caught in a trap, attacking one another."

I recommend that you bring any person to see this play who lived through World War II as a soldier, airman, sailor or employee in the war effort. Then go to a place for good conversation and fine beverage and let that person talk. The stories raised by All My Sons are as important as the play itself.

At Historic Ramsdell Theater in Manistee, Michigan, James Earl Jones started his career in Shakespeare's Othello. Use the Force, ArtWalkers, and fill the Community Center this weekend, Friday and Saturday.
http://en.wikipedia.org/wiki/James_Earl_Jones