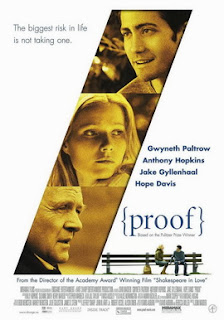 This is a republishing on a classic Captain Art Walk article, written two years ago in 1/23/2012.
CONCLUSION?: You must see Proof at Muskegon Civic Theater this weekend. Then, maybe see Proof performed in French.
When you see a great community play executed, one wonders all kinds of questions. First, when will Muskegon Civic Theater afford to maintain plays in rotating repertoire so we can see them twice? Confession: I regret missing Doubt, which ran in November. Rotating repertoire would give me another chance to see Doubt. Hope Summer Repertory Theater follows the rotating model, giving us plenty of chance to catch a show before it closes. Second, now that the Sprague family has primed the Muskegon - Chicago talent pipeline, can we expect more Chicago style talent on the stage of the Frauenthal, Beardsley and Howmet? This connection is essential because we have a paucity of acting schools compared to the capacity of Chicago, New York or even Detroit.

I have enjoyed Proof, the play by David Auburn, once before. This is the first time I've heard the script in English. During my first visit to Montreal, the September of 9/11, I attended a French language performance of Proof in a theater of the Place Des Arts, which featured a fully constructed house on stage. I gained a touchstone for judging the emotive power of an actress that evening. When Catherine sat on the divan the morning after her connection with Harold, the Quebec actress gazed out into the audience, totally immersed in her reverie. I  had felt she singled me out for my gaze. In a minute, I realized the impossibility of that idea. Thirty seconds after that, I felt an incredible rush of embarassment, witnessing this moment. The actress had knocked down the fourth wall with a daydream. When hearing a cover band play a favorite tune, say for example Ted Nugent's Stranglehold, there are certain notes the cover band must hit correctly and I await their execution with intense anticipation. If the cover band can hit the almost symphonic notes of the bridge right, I'm willing to throw money.

I am not equating the Muskegon Civic Theater to a cover band. I would call them more than a tribute band, and there's many truly committed tribute bands, such as Silver Pipe, the Jethro Tull tribute band. Catherine as performed by Erin Sprague brought nuances to the role unimaginable on the Québécois stage. Her Catherine delved deeply into the nature of depression and mania. I truly found myself wondering if the stage crew had the time to change Catherine's makeup between entrances. Minute adjustments in gait, gesture and even cant of the body evoked sympathy and understanding. Constuming changed to indicate Catherine's mental state. When she entered a depressive state, her robe like attire communicated this mode accurately. Heading off to Northwestern in a pair of Levis and a snug Northwestern purple cable knit sweater, she exuded the fresh energy of fall semester. Dressed in the dress of mourning, a gift from her sister, we all sincerely wanted Harold to break through the ice. For a woman who can change the world with a single proof, I admired how this Catherine could turn on a ghetto attitude, signaling a double middle finger through a window pane. However, I was disappointed that this Catherine, the morning after, was given no time on the stage before Harold arrived on the porch, flashing him an uneasy glace and scooting over.

F. Remington Sprague carried off his role well as Robert, but I cannot but help to compare him to Robert of Montreal. The Robert of Montreal never lifted his voice, even when engulfed in the fullness of a manic state, working out in the cold of December. Compared to this prim and well-turned out Robert, the dress of Sprague as Robert evoked more the spirit of Archie Bunker than Blaise Pascal. It was a slight miscue in constuming, but to my mind, the only miscue throughout the wardrobe. I was moved by Sprague's perfomance, but I wished he hadn't evoked King Lear at his character's most vunerable moment. Robert had two excellent daughters, paragons most unlike Goneril and Regan. Robert's antigonists had no human form, the twin foes of insanity and death.

Precision is a hallmark of Natalie Carmolli's directorial style. When we witness Harold and Catherine drinking whiskey while their mentor talks, we see the unspoken rapport between the two as the glasses rise and fall in synchronicity, as if they were connected by a quantum force. When we see Robert shuffling through his notebooks looking for a certain volume, it is clear that shuffling required direction and practice to look so effortless and confident. We can, also, count on Carmolli to coax performance far above the level expected from an amateur, civic theater, and David Auburn's script and her direction paid off in many fine moments. With all due respect, Mr. Iddlings, I am slightly hard of hearing; yet, I heard every syllable.

You have three nights left, if and only if, tickets haven't sold out already. Time before they do sell out is an empty set.
http://www.muskegoncivictheatre.org/shows

Montreal has rocked the world of theater forever, thanks to Cirque Du Soleil. Look for the influence from the Quartier des Spectacles, the National Circus School and the Place des Arts.
http://en.wikipedia.org/wiki/Place_des_Arts
http://www.cirquedusoleil.com/
http://www.nationalcircusschool.ca/en/institution

Bill I. always makes it all add up.
http://www.mlive.com/entertainment/muskegon/index.ssf/2012/01/review_dont_do_the_math_but_mu.html