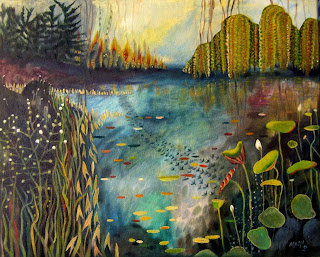 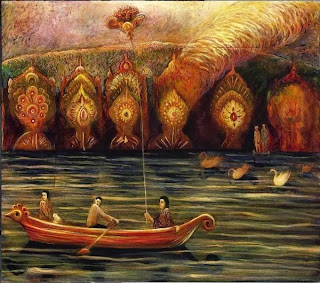 Mary Sundstrom has always wanted to own a painting by Ottawa County painter, Lewis Lumen Cross. Many were consigned to the auction block after his passing; now, the savvy collectors are holding tightly to them as West Michigan realizes the singular achievement of this man who worked in partial obscurity. Prices are going up. One could say Cross was Ottawa County's Audubon, and maybe its Vincent Van Gogh. Like Vincent, Lewis took his own life. Lewis loved the waterways of West Michigan; indeed he loved the waterways of the Midwest, traveling on a barque named Mockingbird across Lake Michigan, into the Chicago Canals, into the Mississippi and across to the Gulf of Mexico to Florida, starting out in October 1888. He told stories about the flocking of Passenger Pigeons in the valley of the Pigeon River.
Annabel Livermore, a persona of painter James R. Magee from Fremont, Michigan, didn't suffer in obscurity. He traveled from Newaygo County and found the mainstream more easily by attending the University of Pennsylvania Law School, taking a degree. And then he worked as an sculptor assistant, cab driver and oil rig laborer as he made art. Despite his time in the art world of New York City and the dry landscape of El Paso, Texas, he never forgot the luxuriant waterscapes of Newaygo County, especially Pickeral Lake north of the town of Newaygo.
That Mary Sundstrom, herself a passionate advocate for the wetlands of Ottawa County, thought to yoke both men's styles into singular canvases, astounds. Lake Michigan absorbs all rivers and apparently the imagination of Sundstrom absorbs all images available to the West Michigan consciousness.
At least one of these canvases shall be revealed to the public at the Grand Haven Winterfest show. The setting is most appropriate because one of the largest exhibitions of Cross's painting was mounted at the Winterfest location of art, the Tri-Cities Museum.