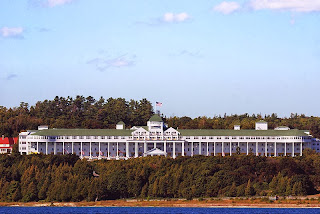 Thu, May 13, 2010 6:00 pm
Hello Jim, or perhaps you prefer Lenfestey,
I was looking over poet Thomas Lynch's reading schedule. It's a good one. A gig at City Opera House in Traverse City MI. A gig on the faculty of Bear River Writer's Conference in Walloon Lake. And then a gig at the Grand Hotel in Traverse City, MI, and I believe that's your work. However, it's not easy to dig up details. I had to read a cached copy of Mackinac Island News to see last year's schedule and it's not yet on your webpage. Haven't checked your Facebook, but well, why are you making us hunt like a coyote for the deets here?

Hate to be a pest here, but http://mackinacisland.org/poetry doesn't work either. The Mackinac Arts Council hasn't updated its webpage calendar since 3/11/2008. You really are on Island Time up there.

I passed a few minutes searching for the answer, but you might know it as well. What is the name of the retired Professor of English who wrote a book on the Grand Hotel, sold at the Grand Hotel, who held a weekly Shakespeare class on the front porch summer weeks. He read and interpreted Richard II keenly. I think it's Robert M. Tagatz. The book is sold online, and I can find no mention on the web of the Shakespeare class taught by him.

There is a point to this letter beyond showing I'm keeping tabs on Mackinac Island poetry and checking the web publicity. My daughter is staffing the fortress in July 3rd - July 10th, and I would like her to key into some poetry whilst she's on the island. These guardians of the Governor's honor are duly bound to wear full dress greens and sash during their walks about the island, so I'm not quite sure the Audubon Bar is the best place for scouts, even if it serves wine primarily.

Does the poetry ever make its way out to the porch anymore? So if you would kindly add me to your mailing list of any email sort, I would appreciate it. Oh heavens, I've written all this, and now realized the futility. I should just friend you on Facebook.

How is Gary Snyder these days. Still scaling Mount Tamalpais?

Well, you've hoisted me on my weakest petards - keeping up my webpage, not to mention the mysterious graveyard called Facebook, in which I wander in like an unredeemed soul.   I'll copy my final (yet unpublished) Grand Hotel Poetry sked below, which includes the 2 appearances of Lynch. Note poet Robert Bly coming in August.  Spread the word of both if you want.

The name your are looking for is John McCabe, who taught Shakespeare at the Grand from age 61 to age 87 , dying in the breech, so to speak.  His replacement became the 61 year old me,  ergo I'm slated to die at 87, in my case reciting Gerard Manley Hopkins' "Inversnaid."
Your daughter will be most welcome in the Audubon Bar (where only water and free coffee serves at 10:45 AM) at my 7July class on Basho.  No prev. knowledge or experience required - have her bring her friends, including her father.  All info is given as a class handout.  All classes are designed to address who and why we should care, and to have fun. Basho is foremost in Haiku, but also in travel narratives called haibun, so the class will be a tour of ancient Japanese poetry as well (I've already done Chinese poerty - twice - but it's greatness is older.).
Fun for me, and frankly for the class too.