Ken Widing Celebrates in Painting Form Emerging from Obscurity; How Long Until this Painter, Whose Paintings Make One Think of Picasso, Emerges from Obscurity? 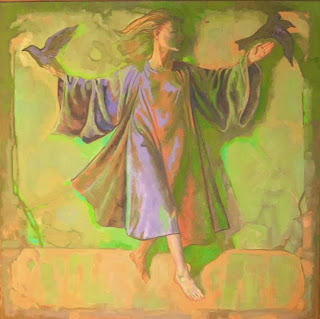 I became aware of the paintings of Ken Widing at the Red Lotus
Gallery. The Red Lotus and the Muskegon Center for the Arts had
gathered strength, began producing shows, and Widing exhibited with
some of the leading artists in Muskegon's community, including Sarah
Zielinski and Ken Foster. This year, I noticed his work in the window
of Buffalo Bob's during Grand Haven Art Walk, and it caught my eye
every time I passed. He has a style that reminds me of Picasso in his
Blue Period, although Widing always seems to paint in shades of rust,
orange and blue.

He has been celebrated at the Holland Area Arts Council with a major
show in December 2009. While his show exhibited in one of the
council's spacious galleries, the gift shop offered Widing's hand
painted Santa Claus images in the gift shop. The artist might have a
knack for celebrating the holidays. Last Halloween Season, October
2012, the newspaper mentions him helping adults and children decorate
pumpkins at the Spring Lake District Library, which is a town where he
has made a life.

Looking into his ArtPrize participation, Widing talks about his band,
Slayton and Widing, and a compact disc has been in the works for
several years. However, like his painting, his music slumbers in
obscurity. The painting certainly deserves more attention in the West
Michigan region and the nation.