Cheer on the Eight Art in Eight Artists Saturday, October 26th at Downtown Muskegon's Winter Farmer's Market 10:30 - 7:00. And Share in the Painting, too? YES! 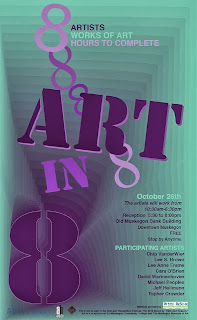 This is the second year for Art in Eight, and the line up of artists couldn't be more exciting.

Michael Peoples exhibited at UICA for ArtPrize 2013, and he placed in the top levels of the vote count, a real contender for top prize. When watching Peoples, keep an eye on his hands because they are remarkably expressive and versatile. Peoples can paint portraits with his thumb-prints. During the day, his hands work culinary magic in the kitchens of the Kirby House, a Gilmore Collection destination restaurant.

Topher Crowder teaches college courses in painting and drawing at colleges in Southeastern Michigan and has a new show going up in the Detroit area this month. Watch Crowder's long, meditative brushstrokes, almost as if he were white washing a fence. He's like the Karate Kid painting the fence. Although his brush style is meditative, when he engraves historical figures on recycled bottles, his movement is fast, frenetic, energetic. Maybe he'll exhibit these and other painting motions this Saturday. Crowder builds custom frames for each painting before he considers it complete. Expect the use of power tools.

Lee S. Brown could be the leading sculptor in Muskegon County, a team player among the volunteers at the Muskegon Museum of Art. Brown has a key role in producing the Jason Quigno sculpture show opening in November and researching a show of Nigerian sculptors still on the drawing board. Look for Brown to be totally absorbed by his engagement with his materials. He becomes one with his work-in-progress.

Many know of Chip VanderWier by his reputation. He was tops in ArtPrize 2012 voting. He is known for kinetic art, sculptures that move, such as a miniature windmill he placed on display by the Grand Haven Area Community Foundation office on the Grand River. He is known for his generosity, and recently he participated in the Random Acts of Fish art project initiated by the Muskegon Area Arts Council.

Lee Ann Frame has an outstanding reputation as a top print maker in West Michigan and a leader of the West Shore Graphics Art Society. Art in Eight might challenge Frame more than any artist on the floor. Frame works in a well-appointed studio, Norris Creek Printmaking Studio. Of all the visual arts, maybe one can say that printmaking is the most like surgery, using tools with sharp edges in a controlled, clean environment. Watch to see how the master adjusts to the wide open space of Muskegon's Winter Farm Market.

Jeff Hellman makes for an unknown quality. Not only does he seem new on the scene, he has turned up few results in a Google search. Art Martin is more than a curator. Martin paints exceptional canvases of the urban and suburban built environment. If Martin picked Hellman for the challenge, be certain that Hellman has the skills and experience to amaze.

Cara O'Brien brings her reputation as one of Muskegon County's top art educators to the field. She's taught classes at the Muskegon Museum of Art and for the Arts Council of White Lake, and even teaches the specialty of post card sculpture for the annual Post Card Salon at the MMA. She met her husband Chester while teaching at Blue Lake Fine Arts Camp, where Chip VanderWier also has taught. O'Brien has a studio practice where she works often with porcelain, and she'll call upon her ability to think-on-her-feet in the classroom Saturday.

Art Martin hand picked each artist, drawing upon years of experience helping to organize the MMA Regional Exhibition. He also designed this year's event with a change-up. There's something of the reality show producer showing up in Martin's plan. We'll have to see it to believe it. Martin has established a station nine where members of the public will be able to interact with the eight works of art. Interact with paint. Did I read that correctly? Now that's a daring, wild card that has potential to create great art or perplexity. Stay tuned, AH!Fest Fans.

Martin was asked if painters and artists could share the floor with the champions. Martin shared his plan for station nine, and he didn't discourage painters to turn out to give morale support. It's going to be an exciting scene Saturday that lasts all day long, so plan on enjoying the amenities of downtown Muskegon such as Drip Drop Drink and Smash Wine Bar and Bistro in between viewings.