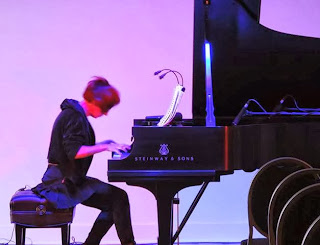 Supové demonstrated that exploding a piano doesn't require blowing off the cover or busting up the keyboard. In fact, she coaxed music from the piano, while spirited, that stuck meditative chords in the audience. We were enchanted by Shattered Renditions of the Western Wind, hypnotized in the way classic Electronica casts a spell.
The pianist might kickbox to blow off steam heated up by her intensity and passion. However, when nodding to queue her sound and lights technicians in The Block's balcony, her face evinced the vulnerability of a schoolgirl. Thanks to the sound sensitive laser projections, her shadow thrown in high contrast upon the thirty foot high northern wall, on the contrary, moved with all the mystique of a Jini.

The Block has a quality that enhances conversation and dialog almost to the detriment of the music. Saturday marked the second concert where people ignored the gong to quiet down and take their seats for the concert's beginning. The conversational energy of the space proved true again at intermission where the gong seemed blithely ignored.
Supové fed that energy. She engaged her audience in a listening game, asking us to identify the Debussy quotes woven into Shattered Apparitions of the Western Wind, a task that no one in the audience was able to achieve, losing the chance to own a free copy of her Exploding Piano compact disc. She told us tales of her effort to bring Debussy into the Twenty-First Century by inspiring composers to realize his music through a new century's instruments and techniques.
Talking in the key of vulnerability, she shared her battle with an eating disorder and body image issues. For the night, beets became a solution for a pleasant snack that could fit into a strict diet. Speaking of battles, her outfit showed that she had triumphed for the occasion over self-consciousness,  wearing a form-fitting, flattering leopard skin print that required total confidence to pull off.
She knows her composers by first name, one her husband Randall Woolf, who visited the West Michigan Symphony Spring 2013 when Scott Speck conducted a revival of Woolf's Shakedown. Daniel Felsenfeld, Mohammed Fairouz and Matt Marks she described as friends named Danny, Momo and Matt. The expressive humanity of Momo's passages left many with a wish to hear more music by this rising star who understands the Arabic world.

Patrons of the Pop Art painter Danny Parker found an immediate way to respond to The Body of Your Dreams by Jacob TV, the opening work. Jacob TV, or Ter Veldhuis, sampled sound bites of television commercials, or so it seemed. From the similarity of voices, a track might have been developed in studio, with actors reading from script language appropriated from commercial copy. Either way, Supové interacted with the bursts of speech, rapid and staccato, as if she were playing in duet with an cello or a violin. The sound bites were to the performance what the lifted, de-contextualized images from magazines and newspapers are to one of Parker's mixed media collages. Jacob TV's work had the effect of educating Saturday's audience to experience the avant-garde music to follow. Interestingly enough, Parker's compositions were not far to seek, exhibited on a temporary particle board wall near Drip Drop Drink on the main floor.
Most of her concert, with the exception of the shorter works and a composition of her husband, Randall Woolf, can be enjoyed by YouTube or Vimeo. Engaging a live performance, however, is a must.
The Body of Your Dreams by Jacob TV (Ter Veldhuis) for piano and soundtrack, based on American infomercials
Shattered Apparitions of the Western Wind by Annie Gosfield for piano and soundtrack, based on the Debussy Prelude

Cakewalks, Miniatures, and Remixes: Short Pieces based on Debussy, Disney, and the Daily News by Daniel Felsenfeld, Mohammed Fairouz, and Matt Marks

What Remains of a Rembrandt by Randall Woolf for piano and soundtrack, Debussy/processed + Vietnamese gongs
Digits by Neil Rolnick for piano, soundtrack and (optional) video Video by R. Luke DuBois