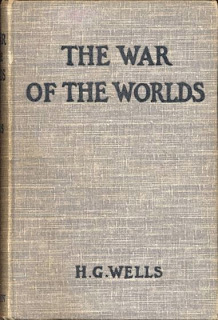 The chilling CBS Radio live broadcast of H.G. Wells' "The War of the Worlds" in October 1938 had millions of Americans, who got their news then from radio and the newspapers, believing that Grover's Mills, N.J. was under siege by alien invaders.

A cast of MCC Overbrook Players alumni will celebrate the diamond anniversary of that famous broadcast with "The War of the Worlds: A Staged Radio Play" on Wednesday, Oct. 30, at 7 p.m. in Overbrook Theater. The performance is free and will be simulcast online on MCC Radio at http://www.muskegoncc.edu/radio.

"While many listeners to 'War of the Worlds' thought it chronicled an actual invasion, many others simply drew closer to their radios to hear a chilling tale told with all the realism of a live news event," said Sheila Kulp Wahamaki, who is co-directing the play with Bill Iddings.

"It had never been done before. 'The War of the Worlds' changed mass media forever.  Now as stock markets move by fake Tweets, viewers flock to TV shows that re-imagine current events and breaking news alerts ping on all platforms – the lessons of the hysterical reaction to the broadcast remain vital."