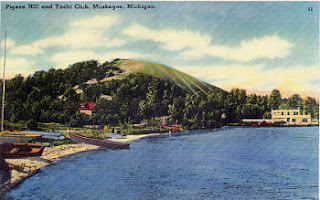 Walking to Pigeon Hill, I encountered a man who was cleaning up his property near the Fire Barn museum. He knows not how to develop the grassy hollow.
To save time, I followed a shortcut through Mike's Inn, backdoor to front door of that shotgun shack of a dive bar. Eight women who deliver mail sat on stools and sipped cold ones.. Attired in post office issued coats, all laughed as I jested, "I guess the mail is in for today"! I looked around for Cliff from Cheers, where everybody knows your name. Maybe everyone knows one name because Cliff let everyone at the bar read ones mail?
At Pigeon Hill, I saw Derek Dile & Courtney Reynolds and I hoped that meant a Julia & The Greensides Performance was imminent. However, the band is doing
fewer gigs, none until December 12 or so. Or so I heard. The band has polished ten songs for a new album & continues to polish. And Muskegon has repatriated Shredd Spread from Seattle, Shredd holding court now as we speak & drink.
A community of people are gathered around a Pigeon Hill table laden with cupcakes. Half the big cupcakes have a sign of a bride posted in the frosting. Half the big cupcakes have the sign of a groom posted in the frosting. Each member of the bridal entourage has a cupcakes posted with their likeness on a sign. All of these people have left the cupcakes alone. Guessing the wedding was celebrated at least thirty years ago.
Tip to the wise. Alaina inspired the newly release Pigeon Hill beer called "Fiesty Latina". Please refrain from addressing her as "Ms. Fiesty". Michael Brouwer has taken a day from his law books & briefs to assist the team serving beer in the taproom.
Visiting the Pigeon Hill tap room today are seven children, mostly young ladies. Not all at one table and properly accompanied by parents. Just like in Jolly
Old England.
A man to my right embraced his wife, planted one on her lips. Then split for the loo. A man to my right asks his wife for permission to buy and fill a growler. She grants him permission and orders a Whistle Punk pizza off of her iPhone. Bargain completed.
The kids are all right! At Pigeon Hill, children drink Faygo soda imported from Detroit.
A man sells reggae inspired art at the Muskegon Farmer's Market. I have spotted his knit cap in Rastafarian colors among the sea of caps. That made Saturday at Pigeon Hill Brewing Company a conscious party, right? And is that really Revel Partner Al P drinking at Pigeon Hill rather then Unruly, where the growing ad agency enjoys a house account to charge tabs upon?
Just had a nice chat with a couple from Buffalo who drove here to see son play hockey for South Dakota in the match up against the Lumberjacks. The two are proud of Buffalo's reuse of the waterfront, Lake Erie & Niagara River. I have accepted a thirtieth anniversary cupcake from Tom and Alice. "That's us thirty years ago". "You look twice as gorgeous", I say. She says, " Eat your cupcake, schmooze". I meant it, though. It's a terrific cupcake.
Beth Atkins is the musical minister at the big Methodist church in Montague. One of my friends, Kara Olson, performed on the piano for services at Beth Atkin's direction. Then, Ms. Olson returned to California. In a random conversation, I made the acquaintance of the new pianist at the Methodist church in Montague. Jere, my neighbor, held court at a table with friends. I didn't have a chance to thank him for allowing me to park my Subaru in his alley lot when the City of Muskegon forbade street parking.
Walking back from Pigeon Hill Brewing Company, I cut through the hall of Mike's Inn again and Brandy was bartending. Brandy had quit Pub 1111 in Whitehall when she got a shot bartending at Mike's. More tips and less hassle improved her income and her life at Mike's. Brandy gladly gave me a glass of water because one Shifting Sands IPA at Pigeon Hill was more than enough beer for today.
The man who owned the hollow behind Mike's Inn was still laboring in his grassy field, trying to decide how to deal with the steep slopes up to Clay Street.
Posted by Wilbo at 8:54 PM