In the Middle of September, Look for Nature's Creative Edge, a Floral Sculpture Exhibition in the Woods of Fruitport @PureMichigan. #ArtWalkerFiles 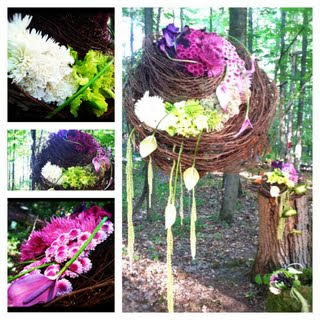 This article about Nature's Creative Edge was published in September 2011. Enjoy!

The woods of West Michigan contain many delights and mysteries, and we love to play in our forests in all seasons. How do we play in our forests? Let us count the ways. At the Muskegon Winter Sports Park, it's possible to skate through the tree trunks on an ice skating trail, 700 feet long. Hosted by the chefs from the Bonfire Grill of Muskegon, Michigan, the Dine and Glide offers skiers and snowshoers a four course meal along a five kilometer trail through the sports park.

Let us not forget the Pond Hockey championship among the tree trunks and sand dunes of that lake shore park. We must remember Paul Amenta and the Site-Lab team and their late July activation of the 140 acres of Blandford Nature Center, with artists weaving meadow grass into Amish signs and children painting watercolors admist a beech tree forest and adults making feather and willow wattle dream-catchers under an antique apple tree.
Although a return in 2012 hasn't been declared yet, in early July, Double JJ Resort in Rothbury transformed into the hyper-activated Electric Forest, a wood land with a live soundtrack. This weekend, Bob Friese, Alice Waterous and James Lutke are collaborating with thirty floral designers from the Midwest to change a forest near Fruitport into a fantasy land celebrating A World of Flowers – Cultures, Countries, Continents, this year's theme.  As of this Thursday morning, floral designers from the Midwest and beyond are racing to finish their large scale floral sculpture before the 5:00 PM deadline. No one wants to work past that deadline anyways because Bob Friese hosts an enchanted dinner party for all designers, combined with a peer review of the five acre park. To make that deadline, Friese has work-tables in his barn, spare props and regular deliveries of flowers and moss and even cattails from floral wholesalers who back the event. Plus, Bob Friese personally assists all his team. I noticed him rolling out a wheel barrel full of hydrangea stems left over from decorating a small cabin at the entrance. James Lutke mentors young designers in the barn, helping a man sharpen tips on peacock feathers and melt wax for securing wood shavings. A leading floral designer, Lutke has exhibited his moss covered peacocks and turtle doves in the White House.   It all began seven observances ago, the first observance a class in natural sculpture Friese taught in the wilds around his home. The second year, his team opened the exhibit to the public. It is now a major event and fundraiser of the North Central Regional Chapter of the American Institute of Floral Designers. Over 1000 gardeners, landscapers and tourists are forecast to attend this year's observance. Hilton Park near Sternberg is a wooded blacktop with homes set back in forests, invisible from the roadway. Park at the corner of the two roads and take the bus to the exhibit. Tickets are available at the gate; advance tickets purchased on the web allow visitors to skip the line.   The exhibits had already sprung to life during my visit Wednesday near sundown. Walking along a comfortable wood chip path bordered with tree stumps, I tried not to interrupt the focused designers. One was bending pond reeds for an Ikebana arrangement to honor Japan. The act of bending is a zen exercise. Also to honor the Orient, a woman and her team were decorating a round orb with red round leaves, a floral recreation of the rising sun. I noticed a complete ofrenda, decorated with marzipan skulls and florals on a Latino theme to honor Mexico. Although I couldn't identify the country, a floral sculpture enjoyed perpetual rain from an overhead log, hollow and porous with holes. I could not hear a pump or see piping from a sand bottom trout stream. Armed with rain catchers and rolls of floral piping, a young man described his vision to honor the Native American spirit. Look for spirits of the forest to arise from these chilly waters, featuring a deer, a bear and trout.   Friese has lived on the wooded estate for about a decade, and he has numerous permanent installations, including a lily pond suitable for a Monet painting and a vegetable garden full of ripe tomatoes and autumn raspberries. There's a loveseat at the base of a series of rusticated concrete steps, overlooking a bend of that cold creek.

Nature's Creative Edge Web Site
Posted by Wilbo at 11:31 AM