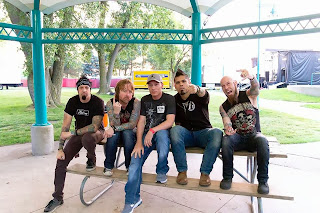 It is conservative to say that Coast West Music Festival and the Lakeshore Art Festival raised a few eyebrows with their success. My reading of the social media indicates every guest found one or two features greatly to his or her liking. I heard great praise for Drowning Pool and their engagement with fans in Muskegon. Here Comes the Mummies, and I think they dress up as mummies, also raised my notice metre pleasantly. One perpetual volunteer I'll call Bronx Eddie worked the gate or safety every night with his wife except the night off to see Drowning Pool.

I wish to tip my hat to Muskegon photographers, a community of camera professionals that includes the Muskegon Camera Club, MLive photographers, other photojournalists and members of the Muskegon is Beautiful Facebook Group. I enjoyed seeing Ken Stevens with camera and MLive backpack exiting the gate numerous times. I delighted in seeing Dave Johnson in a flimsy transparent poncho snapping photographs on the rain day with Foghat and Cheap Trick. We had genuine fog in Muskegon for Foghat. He posted almost a hundred pictures from that day. He composed a great series of Delilah DeWylde performing advanced gymnastics on her cello, the most daring poses I've noticed. All these postings began a feedback loop that drove attendance. Johnson's photographs proved that Coast West was for real. Likewise, Jeanne Vollmer gave her editor Cindy Price plenty of choice images to run in the weekly Lakeshore-Examiner. She worked with telephoto long into the three song encores that began a tradition at Coast West. What? Chicago saved Twenty-Five or Six to Four for the last song of an encore. Cheap Trick saved Surrender, Mommy's All Right Daddy's All Right, for their final song of an extended encore. Vollmer kept on her vision quest until stage lights went dark.

This image by Joe Gee exemplifies the intimate mix of photography and social media practised at Coast West. Our performers spent a little time with us this year. Saw a fellow from Blue Oyster Cult meeting his lady at the gate with a hug and a VIP pass. Drowning Pool vamped it up for Gee's skillful lens, making this memorable shot. It's freshness and promise reminds me of a candid photograph of a very young Mick Jagger around an early Rolling Stones concert at a college in Georgia. This picture must be a buy for Drowning Pool.