After #FreeArtFriday 1-3-2014, The Blue Cobalt Vase by Louie Sanchez is Acquisition 2014.1 of The Block, Performance Space, West Michigan Symphony. 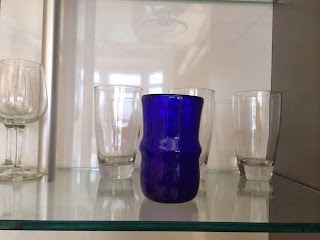 This is an impressive fact in that the Blue Cobalt Vase is the second work of art added to The Block's collection. The first is Robyn Bomhof's award winning painting, Portal, now installed in the welcome areas of the performance hall. Portal had taken the top award at the Muskegon Museum of Art Regional Exhibition in 2013.

Art has the power to make many transitions during its existence. Glass is amazingly good for longevity, as any trip to the glass history room of the Glass Pavilion of the Toledo Museum of Art will prove, millennia of glass artifacts on exhibit on encyclopedic shelves. Let's hope that Sanchez's work has found a home for a few centuries. A symphony in motion tends to stay in motion, and the West Michigan Symphony is driving the economic progress of Muskegon and neighborhoods according to a hundred year master plan, transforming the downtown into a center for education and culture.

One might infer that Sanchez knows all about the glass history room of the Toledo Museum of Art. The record shows that he has participated in the glass laboratory in the all glass building. In February 2011, Toledo Museum of Art Glass Studio honored him as a featured local artist, and invited the community to watch him perform in the hot shop, creating his signature designs in glass. According to Sanchez's Facebook, he often travels to microbreweries and interesting destinations to perform his studio work before patrons, traveling with a tent and a portable glory-hole for liquid glass. It looks as if the Nordins of Furnace Hot Glass and the Glass Academy are behind this brewery tour, where one can drink craft brew from a freshly blown glass mug.

Creating glass in the hot shop is a team performance, and Sanchez has mastered the role of artist and gaffer well. The testimonial of Brent Swanson of Tenfold Glass in Northville, Michigan bears this out, praising Sanchez's support at Furnace Hot Glass. He's a great salesperson of his work too, and I recall making the purchase of the modestly priced vase at the Elk's Club on the outskirts of Royal Oak well. The Elks had hosted a small pop-up exhibit of artists, and Sanchez and I talked Detroit glass, especially since I believed him to be a student of Detroit glass pioneer Albert Young at Michigan Hot Glass, a longtime studio in the Russell Block Industrial Complex. Completed in 1915 to build automotive components, the RIC has become a sanctuary for Detroit arts, a series of tall, strong buildings designed by Albert Kahn himself. Famous rock poster artist, Mark Arminski, continues his legacy at The Rockhouse studio, also at the RIC.

It's great to be a glass artist selling in Royal Oak, Michigan, especially since Habatat Gallery has its main offices and warehouse in the north part of the city. It's just as good to be a glass artist representing oneself in Muskegon, too. Founder of Habatat, Ferdinand Hampson has personally made the journey to Muskegon, accompanied by an exhibition of work by young leaders in the studio glass movement. Hopefully, Louie Sanchez can make the pilgrimage himself soon. Muskegon has been a mecca for studio glass for decades now, with strong collections at the MMA, thanks to the family of C. Corcoran Tuttle, who once organized at annual glass invitation with national scope through her Muskegon gallery.

The West Michigan Symphony Aims to Extend Its Collection Through this Exhibition at the Muskegon Museum of Art, Deadline March 2014.
Never Know What One Wi ll Find at a Pop Up Shop at the Royal Oak Elks Lodge.

Although gaffer is often synonymous with glasssmith or glassblower, usage by Benjamin Moore at the Muskegon Museum of Art supports the usage of the word to name the glassblower's assistant.