Saturday, October 12, Phil Popham and the Helix Collective Led Muskegon to the Dance Floor at the Block, and Muskegon is Never Looking Back. 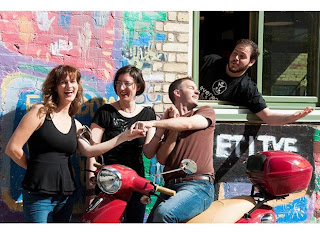 On the face of it, making Muskegon dance at a concert held at the Block seemed like a challenge. Classical music listeners are a dignified lot. However, on the face of it, no one factored in the charisma of Phil Popham and the band members of the Helix Collective. The foursome opened the concert with an Old English styled tune called "The Knight's Ho Gals", and the audience felt lulled into a happy kind of feeling after a snack of peanut butter jelly sandwiches and milk and plenty of liquid courage from an open bar of wine, beer and call liquors. At the last note of that Renaissance tune, Popham commanded, "Everybody up!", and everybody granted his wish. He made it sound like fun to learn the dance steps of the Galliard. We all practiced together. It was a right and a left and a right and a left and a hop, hop, pose.

"The higher one hops, the hotter you are," promised Popham. However, since the instruction came after the song, we were all left with a wish to prove our hotness. We were all ready to ask Popham, "How high?" Popham has served the English Horn for many years, and the instrument has taught him a few ideas about persuasion in the key of seduction. He hopped highest of all. He's not called Popham for nothing.

The Bollywood tune, and the new album World Dance Party has three, made for even easier participation. We were allowed to dance in our chairs. This one included a move called the light bulb screw with the right arm and then the left arm. If you've seen a Bollywood dance number, you know how enchanting that move looks, similar to the Queen of England waving as she proceeds forward in a parade. The waltz brought us to the floor to the first time, and Popham spiced it up with an informal poll we closed our eyes to take. Were we attracted to our evening's companion in an unexpressed way? Yes? Let the waltz be our chance to break the ice. No? Pick out a partner from our audience who had caught our eye. Worry not. The tall bartender was deputized to negotiate any misunderstandings. When the waltz began, the dance floor had filled and the rest of the audience found themselves looking on with envy. No wonder the Helix Collective can hold down a monthly engagement at the Silver Lake Lounge, a famous Los Angeles stage that has seen its share of bands reaching a final high water mark.

Popham has the carefree nature of Wolfgang Amadeus Mozart from Amadeus, played by Tom Hulce. His patrons, such as Carla Hill and the West Michigan Symphony, indulge him because he has Mozart's gift of musical composition. Only slightly regretful, the evening's program focused on music from the World Dance Party album. Popham has impressed the musical world with a series of musical episodes called Pharmacy: Six Medications for Flute, Oboe, and Piano, including an episode called Dextroamphetamines.

The West Michigan Symphony has commissioned him to compose music for their Click Clack Moosic program for children ages three to seven, based upon the books by Doreen Cronin. Tickets for the series are now available in advance of the February 8, 2014 debut of the first in a series of three, Click Clack Moo. Popham the newlywed is balanced out by his sensible wife and floutist, Sarah Robinson, who has a knack for demonstrating dances. The relationship might be compared to George Burns and Gracie Allen, although in this case Popham often winds up as Robinson's foil.

Apparently, the couple met somewhere out on the musical road, maybe New Orleans during Mardi Gras, and Miss Robinson wasn't wooed easily. We had a chance to experience a re-enactment of their courtship and encounter the seductive nature of the English Horn during a pantomime of A Virgin's Pass, another tune from World Dance Party. Was the virgin's love won? We were asked to listen to the drums of Lorry Black for the answer, and we were listening with baited ears to Black's heartbeats when the answer came from Robinson's piccolo solo. Psyched out by Popham one more time.

The musical couple had two extraordinary musicians to back them Saturday night. Lorry Black bridges the world of classical and rock percussion, a drumming evangelist that makes locals think of the festive Billy Vits, of the Grand Rapids Symphony and the surf rock band, the Concussions. Black taught us the dance moves for the circle dance called the Horah, which for the evening skipped a couple on a raised pair of chairs. As we danced the Hora to Klezmer Fantasy, the circle kicked a glass of red wine over the wooden floor and it was cleaned up before the end of the four minute song, with hardly a fuss, by audience members. As if it were a rambunctious wedding. Earlier, the Klezmer credentials of the collective were requested. For the record, Phil Popham has led the Canto Judaica and Lorry Black is a doctoral student of Sacred Music at the University of Southern California, an investigator of the music of the Holocaust.

The beautiful Meghan Schaut played the Block's Steinway piano for the evening, and she introduced the salsa number, "Me Quema", which translates into, "It burns me". Her husband Dave had met Meghan on the salsa party circuit, and she and he had a chance to show off their salsa dancing technique as we learned our steps. The audience must have collectively thought, "It burns us, too", and surely a few bachelors and bachelorettes have signed up for salsa lessons today. That tune inundated the dance floor with salsa loving people, and the Block's light show enhanced this dance number with a fantasy of projected pinwheels and star fields, no mirror ball required.

Phil Popham and the Helix Collective started out with a classical music compact disc, "All In", in 2009, and participation in Classical Revolution in Cincinnati transformed his vision for the collective after performing in a pub of that Ohio city. World Dance Party, released in August 2013, took four years in the making, all of it made for dancing. Popham is a classical music populist, and he often stands in the Frauenthal lobby after performances trying to meet the hundreds of people who attend West Michigan Symphony shows. Dancing gave the collective the ultimate method for breaking down barriers between performer and audience, and between patron and patron, and Saturday night proved his method effective. We'll need a second visit from the collective soon, and most of the collective performs in the Great Lake State of Michigan, thankfully. Andrea Matthews of Three Way Street was called to perform at Theater Bar during intermission, and we want to make sure her daughter and her get a second chance to dance.

One more blockbusting evening at The Block. Next performance, Kathleen Supové blows up the Steinway Piano. The WMS staff makes Borscht.
http://westmichigansymphony.org/the-block/about-the-block/
http://www.supove.com/

For the record, Phil Popham, any one who helps out Mike Zawacki and the Wars of Other Men has support for the long run from here.
http://thewarsofothermen.com/
Posted by Wilbo at 7:53 PM