In the course of #GHArtWalk2013, the City of Grand Haven Enjoyed Visits from Parisifal, the Steam Pig Experiment, and the Magic Bus. 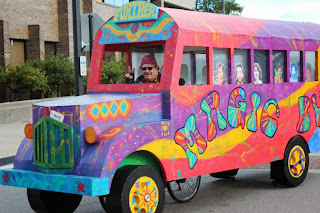 The Magic Bus took us all by surprise when its designer, Daniel J.
Muellerleile, pedaled his colorful Further bus up a side street into
downtown Grand Haven. He set off a string of calls to Randy Smith,
organizer of the bike parade, reporting that a man was pedaling a
psychedelic bus towards Washington Boulevard. Smith set up a great
idea and created a great graphic design to promote it. He sent out his
invitation far and wide, and Further the Magic Bus came, a great work
of art answering.

The Magic Bus became the symbol of Grand Haven Art Walk these last few
days. After standing near the Chamber of Commerce near Waterfront
Stadium, the Magic Bus made the Centertown Block Party just a tad bit
cooler. It guarded at the juncture of Washington and First when the
Indie-Rock Invitational bands rocked out from a stage at the base of
our main boulevard. Wednesday night, the bus stood outside the
Tri-Cities Museum parked curbside, ticketed with an orange fluorescent
parking citation from the state of JK, Just Kidding.

The designer had the idea of selling off sections of the bus to raise
money for his favorite charity, Love Inc. A few concerned members of
the ArtWalk committee liked the idea of keeping the Magic Bus around
for another year. It could go on display Summer 2014 to help get out
the word for the Bicycle Parade, Grand Haven Art Walk 2014. There's
inventive students at the Careerline Tech Center who might benefit
from studying the blueprints and the actualization. The inventor had
stapled the blueprints to the side of his bus. So if five hundred
dollars can be raised for Love, Inc, the inventor will keep his Skill
saw in his tool chest.

The inventor delivered to Randy Smith a thumb drive of the building
process, a film that is sure to inspire the whiz kids learning design
at Careerline Tech Center.

The Magic Bus has to be acknowledged as a work of art in its own
right, and a passionate homage to a vital era in American history. As
you can look up on Wikipedia or in any standard reference, a Magic Bus
called Further actually crossed the United States, a story documented
in the book The Electric Kool-Aid Acid Test. Yes, Ken Kesey, author of
One Flew Over the Cuckoo's Nest, began the journey in the Magic Bus
experimenting with a newly discovered drug called LSD. However, by the
end of the story, Kesey and his fellow travelers totally and
completely rejected the use of LSD and other drugs and began seeking
their natural highs through friendship and community. This makes the
Magic Bus a way of discussing the Sixties as an era when millions of
people tuned in, dropped out and then pretty much dropped in again
after all of that experimentation seemed stupid compared to a hometown
baseball game and mom's apple pie.

Jack Kerouac went home to New England and told all of his followers:
""I'm not a beatnik. I'm a Catholic".

In another irony, OAR has an office in Grand Haven and showed
paintings from their art therapy sessions during a quiet reception on
the day of the Centertown Block Party. Ken Kesey set off on the Magic
Bus and pretty much drove the need to create the Recovery Industry.
http://www.oar-inc.org/

The characters looking out the window at us are depictions of
characters from the decade that changed America forever. Who is
positioned next to whom and where in the bus could be a complete essay
for a masters degree in Art History.

The era gave us the idea of making art out of every day life and the
music festival where people go out into the woods and camp. Isn't that
what Grand Haven Art Walk is all about? Making art out of every day
life: look for it again next fall. Yes, people do go camping during
the Indie-Rock Festival although no one is going to call Dewey Hill a
state park any time soon.

Parsifal the Steam Pig had pride of place in the Loutit District
Library. When pigs fly is now when a pig flew.
http://thesteampig.wordpress.com/

The Magic Bus won first place in the adult division in direct
competition with a mobile Reb Roberts painting, an X-15 Jet and the
Sailing Ship of Paulie Harrigan. Image is borrowed from the Grand
Haven Tribune, so please enjoy the Tribune online and by home
delivery.
http://www.grandhaventribune.com/article/629916

According to designer & inventor & man of literature Daniel J.
Muellerleile of Solution Resource, all you need is Love, Love, Love,
Inc.
http://loveinctricities.org/

Muellerleile is an inventor and here's one patent to prove it. Call if
a solution resource is needed: 616-204-2625.
http://www.freepatentsonline.com/D400737.html