While visiting the "Touch of Color" exhibit dedicated to pastels in the collection of the National Gallery of Art, I encountered a work that reminded me of Patricia Dee and her pastel landscapes. I collected a number of her works and then gave most to a dear friend. I knew that friend would care for them, exhibit them well.


I took a snapshot. I began comparing Dee's talent to Paul Huet's. "Why isn't Dee given pride of place in the Nation's Gallery"? I admit I fumed quietly and turned to the next work of art.


I've been a friend of Dee since 2010, a good decade. Thus I dare say she would like the comparison to Huet, yet she would probably laugh if I said she had better technique or better results than the French master who worked beside Antoine-Jean Gros and Richard Parkes Bonnington, a British artist. Huet made the Salon of 1827, so I'll just state "comparisons are odious" and dust the pastel chalk off my hands. Figurative chalk dust. I know not to touch the pastels on the wall.


Napoleon lost at Waterloo in 1815 when Huet was almost a teen. Britain and France shared culture in the aftermath. Thus Huet fell under the influence of British Art, seeing John Constable's the Hay Wain at the Salon of 1824 and falling under its spell.


I have yet to learn under what spell Dee fell but I do know she works the Ottawa shore and the Grand River Watershed, so the enchantment might feel strongest upon these lands. I'm looking at a Google map of the crossing of Henry and West Pontaluna Streets, near Little Black Lake. An unattended blueberry field might still stand among the brushy corner. As Autumn takes hold, the branches of these now wild blueberry bushes take a hue of red that Dee depicted exactly in an image that caught my eye and opened my wallet. Similarly rank blueberry bushes, awaiting the brush hog, probably a different corner, another field, found on the patrols of this restless artist who must go see. 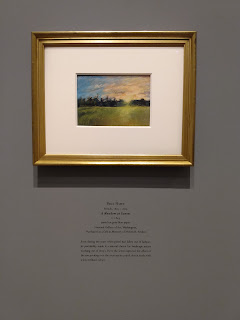