This amazing image was Captain Art Walk's image of the day for Monday, June 24th, 2013. See for your self in downtown Muskegon. #ArtWalkerFiles 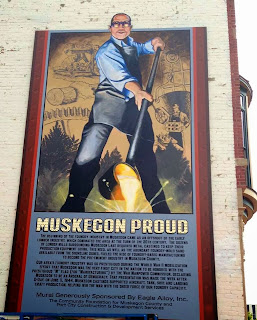 This amazing image is Captain Art Walk's image of the day for Monday, June 24th, 2013. See for your self in downtown Muskegon.

Civic ego has returned to downtown Muskegon. No sarcasm is implied. I love it. This big, proud mural has lit up the Muskegon email like nothing else. A picture of the mural design sent by an Eagle Alloy Sales Representative had been forwarded and shared many times before it reached my box, accumulating thousands of email addresses along the way, stored in the body. I noticed names of people I knew and many more names of people I didn't. I saw domain names for Muskegon companies I had never heard off. Civic ego sets of waves like that in conversational networks. When Compuware and the Karmanos family put the Kern Clock on display again on the side of Woodward, Detroit's Main Boulevard vibrated with the excitement of Civic Ego. The Muskegon Foundry mural makes a firm statement: the Muskegon renaissance is no flash in the pan. It's a hot burning passion that melts obstacles and expels nay saying like dross. Last Friday, Civic leaders broke ground on the new farmer's market. As a grace note, greeters gave attendees of the ceremony bouquets of asparagus spears. Now that's a fine, fine sign.