Since May 1888 in Muskegon @PureMichigan, Every Friday in May has been Celebrated as #FreeArtFriday. Saturday May 3rd, 2014 Will Be the Biggest #FreeArtFriday ever. 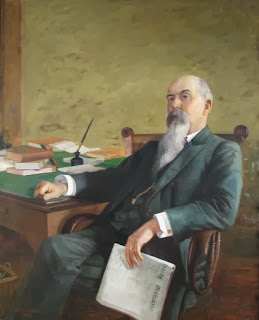 Dear Friends of Art & Culture in Muskegon, Michigan:
I was looking for information on the 36th Annual Regional at the Muskegon Museum of Art. The intake is usually the first Friday and Saturday in May. Which are dates that coincide with the opening of the new farmer's market and also the first observances of May, traditionally Charles Hackley's choice for presenting gifts to the city.
A number of the #FreeArtFriday team are looking at this date for an exhibition where artists can sell art to be gifted for Fridays in May. After all, the town will be accepting the gift of a four million dollar market. It is also the time when the city has acknowledged gifts of statuary and even entire buildings, including the offer of 100,000 to build a library May 25, 1888.
In 1890, Charles Hackley gave the park that bears his name to the city, again using the month of May as the occasion.
In 1905, the year of Charles Hackley's passing, the Hackley Park statuary was valued at twelve million dollars, in 1905 dollars. That's some #FreeArtFriday gift.
The artists who are juried AND submit a social media plan AND attend an online social media seminar will be invited to purvey their art for free, in keeping with the Free Art theme. Tentatively, one location downtown has said yes to the provision of space to artists under this plan. The idea here is Muskegon could use rental dollars. What Muskegon needs as much as rental dollars are artists who would consider Muskegon as a home. Muskegon needs visits from the two hundred or more people who follow the artist and collect the artist. We would like our visiting artists to linger in the city. We would want everyone in West Michigan to consider and make a visit to downtown Muskegon and Lakeside on the first weekend in May.
As Joe Girard said, the world's greatest automobile salesperson said, every person knows two-hundred and fifty people who follow recommendations. This has become even more true in the social media age.

Although it would have to be requested of the city and the farmer's market, it would follow that farmers and vendors at the flea market be able to purvey for free that first Saturday in May.
The idea here is that for #FreeArtFriday, the art must be free for the final transaction, the gift between the giver and the known or unknown benefactor. So encouraging our friends and neighbors to purchase a work of art to gift or to "deposit" is in keeping with the #FAF concept.

In one possibility, we would like the artists to spend the weekend in Muskegon, again for free with a host family. This could be handled through AirBNB, which allows visitors and homeowners to get a look at one another, allowing a "curatorial" decision to be made.
Thanks for your consideration and your time this Saturday afternoon in January
Captain
Posted by Wilbo at 3:15 PM