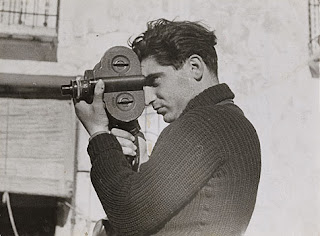 A friend and I had chance to see Muskegon Civic Theater's production of "Time Stands Still" Saturday night. I had this play on my short list since Performance Network in Ann Arbor opened their 30th season with the contemporary play, starring Suzi Regan in the title role of Sarah Goodwin. One could say the Network gave one of their best actresses the most demanding role; one could also say that Muskegon Civic Theater followed suit. Carmolli rose to the challenge and brought a roundness to the character of Goodwin. In my thoughts last night, I decided to discuss her triumph in terms of the three phases of Sarah Goodwin.

If one has ever experienced any kind of sharp bone pain, Carmolli's arrival home to her Brooklyn apartment will evoke memories of that pain as she walks assisted by crutches and her partner, James Dodd, played by Christopher Beaman. Although a wheelchair was clearly indicated, this fight to stay erect and proud gave the play its first means to raise stakes. Sarah must not fall. If one has ever witnessed a family member fall or almost fall due to age or weakness, Carmolli's teetering, wobbling, tottering performance has the power to affect viscerally. Add to that the ability for a vibrant actress to depict fatigue convincingly. Probably an effect of makeup artistry, Carmolli's eyes are unblinkingly alert and drawn open by an unseen force. It was uncomfortable to see her look frankly cadaverous, again reminding audience members of family emerging from surgery or trauma.

Director Tom Harryman must be acknowledged for his mastery of stage craft, especially of stage movement and blocking. His projection of photojournalism imagery from war in the Middle East brought context to the black box, projecting these upon raw wall of the Frauenthal, breaking the imagery as much as our heroine had been broken by an IED explosion in Iraq. There's no social media or Google intelligence to make coincidences pop so that the serendipity can be used: Ryan Spencer Reed, a genuine war correspondent, had opened a show of work from Sudan in the gallery close to Harryman's office January 10th. Harryman based most of his blocking upon the metaphor of the boxing ring, with Erin Madalynn Mickelson as Mandy Bloom delivering love taps of sweetness and light from the kitchen. Bill Iddings as Richard Ehrlich pulled his punches from the left side of the couch, and delivered feints from the doorway. A kind of referee, he always called the end of a match by summoning Mandy and going home. Beaman in the center of the ring fought from the dreaded center like a welterweight, ending up punch-drunk more than once. One free-for-all over an article that fell to the cutting room floor evoked a brief moment of lyrical insanity, a state achieved at length in masterpieces by Yasmina Reza in God of Carnage and Art.

The moment of chaos ended immediately as Sarah staggered and almost fell, the stakes remembered by her three partners and closest friends. God of Carnage ran madly until the point of exhaustion. Yes, I saw Carnage at Performance Network, with Suzi Regan in the fray.

When Carmolli's Sarah must go hand to hand with herself and her memory of a woman bloodied from a blast in a Middle Eastern city, her bantam weight scrappiness scores a technical knockout upon herself, and reeling, only Beaman's Dodd can rescue her.

In the second stage of Sarah Goodwin, Beaman withstands love and pugilism with equal valor. Carmolli with an aluminum cane had most of her beauty and energy returned, fighting ironic battles with Beaman over his betrayal in Iraq and her infidelity with a hired guide, known as a fixer. Driven by a need to speak the truth as best as she could apprehend it, she fought injured, vulnerable, less than full strength. Again, makeup made this status most apparent in Carmolli's hair. If anything, perhaps Carmolli could imbue her performance with a bit more of the spirit of Dorothy Parker at the Algonquin Round Table, Goodwin and Dodd living in Brooklyn after all. In the moment she suits up to return to the front, Carmolli's Sarah is restored to her full energy and poise, after about a year's recovery. The stage lights went dark upon the third phase of Sarah Goodwin's recovery.

Production values measured high for a amateur production by theater professionals, presented by a community theater. For example, Sarah accepts a gift that is gloriously wrapped in a silvered paper; the copy of Robert Capa's Slightly Out of Focus (Modern Library War)

contained within might just be a first edition from 1947. In the coldest months of the year, we have to be grateful that Muskegon Civic Theater brings the most fresh scripts to arguably the warmest room in Muskegon, the Frauenthal Stage. This production of Time Stands Still follows the tradition well, following Proof, the Rabbit Hole and Leaving Iowa. Sitting in the stadium seating around the stage floor, we become the chorus of these emotional productions, and one can see the faces of the downtown real estate developer, the producer of concerts in small Muskegon chambers, the professor of art from the community college and the playhouse director and neighbors we might hope to know when time returns unstilled.