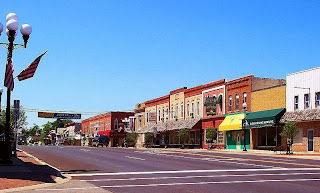 I am not a direct driver. I can take a three hour drive and turn it into a day long car trip. You know that kid who wants to stop every cool stop along the way? That child lives inside my head and he has my inner ear close to his lips. I like the drive across Michigan of I-94 to I-69, but I was feeling less than enthusiastic about tearing off towards Grand Rapids along it. So I caught Sherman and jogged over to Heights-Ravenna road. That is, I caught the road from Muskegon Heights to Ravenna. Our pavements remind me of a dental patient that has ignored cavities and fillings were indicated until I got to roads maintained by Muskegon County. I noticed snowdrifts reduced to tar covered snowpiles, piles that will continue to shrink into a pile of asphalt fragments. I saw creeks and runs full of snowmelt. I counted lowland flooded with temporary slushy lakes. I passed fruit orchards, trimmed over the winter, the tree rows littered with twigs and limb prunings. How well those would burn in a chimenea on a chilly early spring evening. I wonder who is charged with gathering them up. I followed a few birds winging across a stand of trees, and I didn't recognized their shapes, nor the way their wings beat the air. I pulled into Ravenna for a quick bite at the Roundtable, a quaint clean cafe run by a man and his sister. She waits tables and he runs the kitchen. He makes great soups and fresh from scratch pies. When I emerged after a six dollar round of soup, pie and ice cream, I saw the flurries.

The Rogue River on east side of Sparta showed high waters turgid with snowmelt. I can't believe how long it takes to drive through Greenville, Michigan. I contemplated stopping in the downtown district and look for the building that housed the original Meijers. The Flat River looked well fed with snow water. I enjoyed seeing rushing water flowing through the two creeks of Carson City, Fish Creek and Butternut Creek, the Butternut soon to merge into the Fish. East of Carson City, the snows begans to carpet the road but not enough to impede driving. I stopped in Chesaning Michigan because I know the town almost too well. Chesaning is a river town on the Shiawassee River, and in an indian language, Chippewa I think, it means Big Rock. That Big Rock once stood on the shore of the Shiawassee and marked a point on a north - south trail. It is my understanding that trail runs roughly the Michigan Divide between watersheds of Lake Michigan and Huron, but I'm no archaeologist or Michigan historian. The rock now stands in the playground of a Chesaning Elementary School, and I've stood on top of it with my daughter and her cousins. On a rainy slushy day when I was driving them up to Frankenmuth for the chicken dinner.

Ah Chesaning, Chesaning, Chesaning. My father bought a car from a dealership in the late Seventies. Don't ask me why we drove all the way up their from our farm in Byron, Michigan to pick up a Vega. It took a while for my father to get the hang of the stickshift, so it required an afternoon to arrive home. A friend of mine from scout camp lived in Chesaning, and I remember when he declared himself an atheist one day when we were sitting on the back porch of his house. I uttered a whole bunch of arguments which he dismissed, saying he had argued the point with better prepared people, ministers and teachers. I remembered him showing me a civil war sword, the first in his collection, and I remember regarding the blade on my lap and thinking, "if I ran him through, his soul would go straight to hell". I lost track of him when his parent's divorced and his mother and he moved to an apartment in Corunna, south of the tracks. I once banged on the door and found no one home. I have heard he became a wealthy banker.

My Freshman college roomie, and I had two, came from Chesaning. We all lived on the third floor in Wonders Hall, south, one of the student housing projects we were forced to live in during our first year so the college could keep an eye on us. He came with a lot of painting talent and a bong and a drug connection that could find him hash and sensimilia. I was glad when he spent the night sleeping with a young woman who lived over in Wilson Hall.

We clashed on everything, especially music. I was raised in the folk tradition, attending Michigan up-north camps from age eleven onwards, and I knew enough songs to write a song book. And I was a huge fan of Harry Chapin and he was so into Journey and Neal Schon. Once time, I was in midst of a discourse on the virtues of Harry, and oddly enough my roomie stopped me midsentence, "Wilbo, you suck". Which is ironic to say to a Harry Chapin fan.

He also insisted upon sleeping with the radio playing, which simply played upon my insomnia. My other roomie came from Cass Tech, even had Kwame Kilpatrick stories to tell, brought real Italian wine to the room, dry as a desert, made by his father. He also had a lovely girlfriend, daughter of a successful lawyer family living in Indian Village, and she always slept in our room. So not only was I living in Michigan State University's last dormitory triple ever, I was learning to sleep through freshman mating. I was rescued from this in the Spring when I pledged a fraternity and started sleeping over there and by a young Republican, who let me move my stuff into his dorm room and lectured me on free market principals until I fell asleep. The roomie from Detroit called him Zeke the Wonder Friend.

I saw Detroit and Chesaning again in the post-college afterlife. Chesaning apologized for being an ass to me. I accepted but I was pretty sure I was totally annoying and asked him to remember the pizza nights and the keggers and the good times instead

I have a hard time believing, as I looked at the Chesaning Showboat in dock near the bridge, that Adam Lambert sang on the deck of Chesaning Showboat. Was it last summer or has that much time passed. It looked in dire need of a coat of paint and even made the General Lee of Lowell, Michigan look elegant.
http://www.chesaningshowboat.org/

Really, I love the General Lee in Lowell, if it still bears that name. However, you never forget your first showboat:
http://www.lowellchamber.org/concert.htm

I didn't go into the Bonnymill to find out if Adam Lambert took his rest there after his concert.
http://www.adamofficial.com/us/intro

My roomie from Frosh Year in Wonders Hall, 1981 - 1982, always had some really good sh*.
http://www.urbandictionary.com/define.php?term=sensimilia

Neal Schon
http://www.schonmusic.com/
SUPPORT THIS WRITING PROJECT WITH A SECURE DONATION!
Posted by Wilbo at 4:28 PM