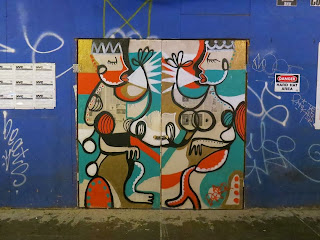 He gave away all but two of his paintings he had exhibited on the particle board that once separated Drip Drop Drink from the construction in the Russell Block. A work by Robyn Bomhof aside, these paintings constituted the first art exhibition in the Russell Block building since the building had inhabitants again in May of 2013. When Unruly Brewing Company prepared for opening, the particle board came down and the paintings were kept safe until Parker could arrange for pickup.

Parker was peculiar in the way he structured the exhibit at the Russell Block. He didn't catalog the paintings. He didn't label the paintings with titles. The exhibition appeared anonymously, without even a sign to identify the works of arts as art by Danny Parker. Parker has never been a publicity hound; however, this might have been his most secretive exhibition ever.

Parker arrived to pick up the works of art Saturday in the late afternoon. He was hurried because he had to report for the night shift at one of the two pubs where he tends bar.

He had loaded two of the works of art into a car, which might have been the one purchased at A.S.A.P. Automotive, Getty Street, for a thousand dollars flat. Then he saw a crowd of early customers for Unruly's evening business. So he made his way around the bar, reaching out to customers, and he gifted the remaining works to bar patrons willing to take care of them. By one estimate, this is at least ten works that Parker gave away personally. His friends have heard him fantasize about this bold move for about a year now. The vibe in the newly opened Russell Block gave him the scene where the "Free Art Friday" action could be executed.

It's been a frustrating year for Parker, still recovering from a back injury sustained while shoveling snow last winter. He's been working so hard at two jobs that he's had to arrive late to art events held in his honor. Without proper studio space, and his painting method requires plenty of space, his output has dwindled.

If you were a recipient at Parker's first "Free Art Friday", please take good care of your original Danny Parker.

Will Free Art Friday Catch on in Muskegon?
Posted by Wilbo at 4:14 PM