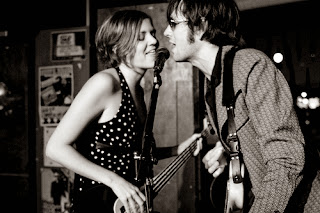 Sat, December 7, 7pm – 8pm
The Book Nook & Java Shop, Ferry Street, Montague, MI
Nick Kraus and Miss Kathleen 7pm Saturday, December 7
Nick Kraus sings and plays guitar with his wife Miss Kathleen on bass and harmonies. Kraus has an amazing ability to write lyrics that are subtly uplifting and crushingly depressing at the same time. They have played all over Texas and the Southwestern United States.
With a sound that can only be described as genre-bending, Nick Kraus & Miss Kathleen offer a blend of alt-country, rock, blues, punk, folk, and all things Americana. Kraus's gravely Dylan-esque vocals are backed by the sweet harmonies of wife Kathleen, creating a sound that is both unique and yet subtly reminiscent of the glory days of Johnny Cash and June Carter.

The duo met in 2002 while Nick was playing guitar in an instrumental trash-rock band called The Clap for the now defunct Kalamazoo Precinct of Women Wrestlers (KPOWW). Miss Kathleen, then a wrestler, joined the band, thus beginning their musical collaboration. Together they went to Boston and founded the still strong Boston League of Women Wrestlers (BLOWW) while Nick attended Berklee College of Music. In 2005, they decided to leave cold weather and their punk rock roots behind and head to Texas, where Nick Kraus and his Austin Torpedoes was born. In 2008 they released ...the tragic tale of kim & polly jean, the bands first full-length album, engineered and produced by Ted Roberson (Brandi Carlile, Bob Schneider). They then toured the south-west United States while still finding time to lay down their second full-length album, Long-Winding Stretches, released in 2010.

2013 finds Nick Kraus & Miss Kathleen back in West Michigan about to release their new EP The Burden. They are currently performing as an acoustic duet. Nick plays lead guitar and Miss Kathleen plays a variety of instruments, including guitar, bass, and banjo. With a wealth of stories and songs ranging from old time standards by greats like Hank Williams, Johnny Cash, and even Bruce Springsteen to originals written by Nick, they will give you an evening of toe tapping tunes guaranteed to dance around your head for a while.