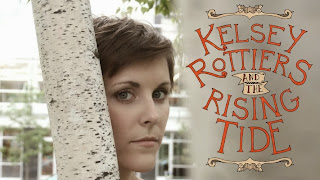 So an arts blogger walks into Russell Block, and Kelsey Rottiers is tuning up on a genuine, one-foot-off-the-ground stage, with speakers and a black curtain backdrop. Todd of Drip Drop Drink borrowed the stage from Watermark 920. He's working sound as he heats up water for pour over coffees. Todd is good with his hands and he has plans to build a stage custom for the space, which one observer compared to an indoor beer tent. That might be a back-handed compliment.

Collecting at the bar of the Unruly Brewing Company bar, we have members of the Muskegon Ottawa Brewing Club, eighty members strong according to the membership rolls, coming in to taste the brews of Unruly. They'll be heading down to Pigeon Hill Brewing Company, by foot hopefully, for the 6 PM Sunday meeting.

Rottiers is known for the song Bear Hope, an anthem fighting against human trafficking. She cooperates with Women at Risk International, which fights trafficking by economic and legal means. A program of Women at Risk, the War Chest Boutique retails jewelry made by women recovered from trafficking, and Rottiers wears this jewelry at her performances, such as today. War Chest Boutiques are found in Wyoming and Rockford, Michigan.

Asked around, and this has to be the first concert in the space shared by Unruly and Drip Drop Drink. The acoustics are great and Rottiers sounds dulcet and energetic.

No concert today at The Block upstairs this Sunday afternoon, and one wonders how double concerts will work when The Block welcomes Teri Hansen, Singer. Actress. Ginger Bread to the upstairs concert hall for 150 people. She'll be up in The Block Sunday, December 15th at 3 in the afternoon, doors at 2. So many people downstairs even today are unaware that a wonderful concert hall exists upstairs.

The Muskegon Ottawa Brewers Club is growing to be quite a M.O.B. It seems that every member has a nickname. One fellow is named Plowboy. Well, MOB, speed the plow.
Posted by Wilbo at 5:36 PM