Everyday People, an Art Project Between Muskegon's Area Art Council & Coalition for HIV Awareness, is a Poignant Success. See It Before Tuesday, 12-3! 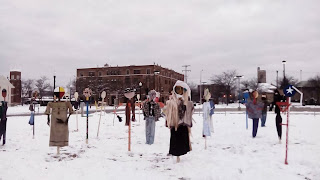 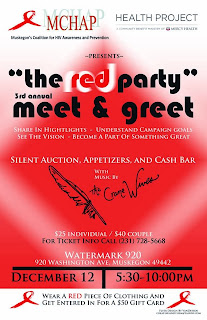 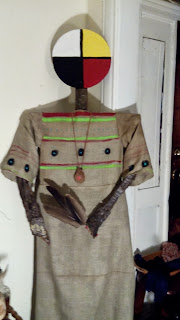 Each one of the Everyday People statues has a story, just as every AIDS quilt has a story. One is dressed all in black clothing, carrying a message that made a difference before AIDS became a chronic disease: Act Up. The Gay Community in America did act up, and the world of medical research was upended by their upward acting. Silence = Death and their Acting Up = Life for many, many, many. And there was silence that had to be broken up. Rolling Stone carried the story of AIDS at least a year before it hit the cover of Time magazine.

Two statues replaced the face with a mirror so an observer could see that the HIV plague, still a plague, could affect the man or woman in the mirror. One statue arrived dressed in the clothing of an Indian shaman, and carried a medicine bag of herbs and incenses intended to allay the pain and suffering of HIV. One statue arrived dressed in the clothing of a woman from the Middle East, showing that the plague respected no borders, affected all genders and crossed from ethnic group to ethnic group with little effort. One was fashioned to look like Captain America, showing that the venereal disease could affect solider and superhero alike. There's around two score of the Everyday People statues, each the work of a local artist, and each tells a profound story. Walk about the community of Everyday People placed the the corner of Western and Second Avenue and let these silent statues speak to you eloquently.

From conversations with two people deeply involved in the project, four artists constructed Everyday People to honor a family member who struggles with HIV. According to conversations at the reception Friday night, we discovered connections of no more than two degrees of separation with people who struggle with HIV. The plague is still among us and vigilance is still the watch word. Wear protection. Get tested. Share the word.

The MAAC and MCHAP wish to honor the following artists who shared their talents to make the Everyday People project work so well, so poignantly.

When You Install An Art Project Next Door to the MLive Office, Good Coverage?