The Muskegon Museum of Art will present Bernhardt on Broadway, a one-woman musical about Sarah Bernhardt by Carol Dunitz, on Thursday, October 24, at 7:00 pm. 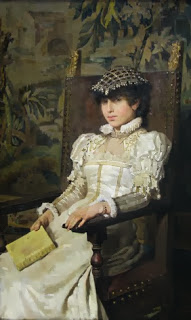 Bernhardt on Broadway: Ticketed Live Musical Performance at the Muskegon Museum of Art

The Muskegon Museum of Art will present Bernhardt on Broadway, a one-woman musical about Sarah Bernhardt written and performed by Carol Dunitz, on Thursday, October 24, at 7:00 pm.

Bernhardt was often referred to as the most famous actress who ever lived. Set in the 1890s when the Divine Sarah was at the height of her career, the show is reminiscent of the Golden Age of Musicals. Twelve songs enhance the action and seamlessly contribute to the story that unfolds. This 'no holds barred' exposé tells the story of the world's first superstar— the daughter of a Jewish courtesan who overcame countless obstacles, formed her own theatre company, and traveled the globe performing (in French only) to sold out crowds.

Carol Dunitz, a professional writer and speaker, wrote the music, book and lyrics for Bernhardt on Broadway. Extensive research, using both English and French sources, enabled Dunitz to develop a very clear picture of Sarah Bernhardt and the demons that drove her. Read more at www.BernhardtOnBroadway.com.

This performance is underwritten by Hooker DeJong Architects & Engineers.

Dr Carol Dunitz Performs Musical and Business Communication Miracles.
Learn More About Bernhardt On Broadway
###
Posted by Wilbo at 10:50 AM