The #GHArtWalk2013 Balloteer, known only as Mister N, will make a final round of ballot boxes at Noon today. Vote now before lunch! 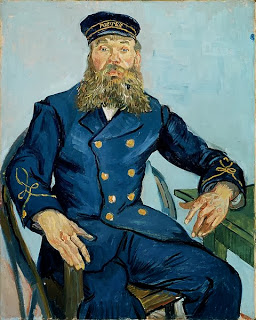 From the beginning of Grand Haven Art Walk, Mister N has walked a path of volunteer duty. Daily, at closing time at the Fire Barn Gallery, this handsome man has arrived after making his expected stops at our ballot boxes outside the Frame and Mat Shop in Centertown and Michigan Rag Company downtown on Washington. He has a silver key that he twists in the ballot box lock, and he packages up the ballots that had accumulated during the day. Through the early autumn evenings, he has faithfully counted each and every voting slip, keeping a secret running count known only to him. He might be a retiree or he might be running a hedge fund. He has that look of a man who has known success and probably sips Dos Equis with the Most Interesting Man in the World.

Fairness and squareness are his watch words. His friends at the Rotary Club probably won't give up his name.

Since he has kept a running count, that is how the vote total can be announced at 5:30 PM Wednesday, that's today, at the Fire Barn Gallery. He'll make his final circuit of the the voting boxes at Noon and probably have the winners determined by One in the afternoon. Monday night, I spied Mister N on his final stop, and I wanted to ask him if he had a gold conductor's watch on his person. But he allowed no distractions to his appointed task, and he marched to his counting hideaway without taking notice of me.

Thank you for your valuable role in the Grand Haven Art Walk, whomever you are, Mister N.

Wednesday, 10/2, Voting ends at noon!
Announcement of ArtWalk 2013 Winners, 5:30 – 6:30 PM: Come to the Fire Barn Gallery to find out who will take home the first and second place prizes in all four categories.

http://ghartwalk.com/event-info.html
Posted by Wilbo at 9:03 AM