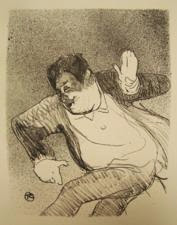 The word "Nabis" means prophet in Hebrew and Arabic and was a term applied to a rebellious group of young art students at the Académie Julian in Paris, France. The poet Henri Cazalis (1840 - 1909) coined the term "Les Nabis" by drawing parallels between these artists, who aimed to revitalize painting much as the ancient Jewish prophets rejuvenated Israel. This movement set an avant-garde pace for art, one that was distinctly different from the Impressionist painters who used small, thin brush strokes to emphasize accurate depictions of light. Erv Raible began collecting when he and his business partner opened cabaret and piano bar style clubs in New York City. A critical question they faced was, "what should the club's ambiance be?" One of the clubs Raible revitalized had chandeliers that resembled Moulin Rouge in the 1890s and Raible quickly thought of the artist Henri de Toulouse-Lautrec. Fin de siècle French prints became the collectors' focus. GVSU acquired this collection of French Prints in 2009 and has made numerous reproductions since for display purposes. This French print collection today may be found on the GVSU Allendale Campus, Robert C. Pew Grand Rapids Campus, and the Detroit Center.

Free and open to the public.  The West Wall Gallery in located on the second floor of the L. V. Eberhard Center, 301 Fulton Street West, Robert C. Pew Grand Rapids Campus.  For more information call the GVSU Art Gallery at (616) 331-2563 or visit: www.gvsu.edu/artgallery/